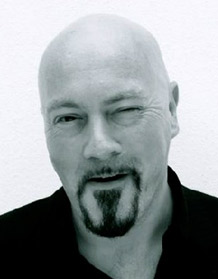 Since graduating from the Faculty of Arts with a BA(Hons) Expressive Arts (Music) in 1985, scriptwriter, producer and comic actor, Graham Duff has created a highly individual body of work for TV and radio.

Graham's work often takes inspiration from the worlds of music, horror, sci-fi and art house cinema. His scripts are known for the pushing of comic genre boundaries, attracting some of the biggest names in British comedy, including Johnny Vegas, Mark Gatiss, Julia Davis, Steve Coogan, Ben Miller and Simon Pegg.

Outside the world of TV and radio, Graham has worked with acclaimed sound collagist Vicki Bennett on three of her ‘People Like Us’ albums, as well as collaborating with Mark E. Smith, Wire’s Colin Newman and ‘art terrorist’ Stewart Home. He also executive produced Celebricide’s debut album and has DJ’d at the Victoria and Albert Museum.

Graham uses a range of cultural references to inspire his writing, producing scripts that draw on the sit-com genre but then explode into unknown worlds that are permeated by the surreal, hilarious and utterly bizarre.

As a writer and actor, Graham performed as a Death Eater General in the recent ‘Harry Potter and the Deathly Hallows’ Part 1 & 2, and he is soon to be seen in a role as a convicted paedophile in David Cross’s dark US sit-com ‘The Increasingly Poor Decisions of Todd Margaret’.

Graham presented at Screen South's Writing for Screen Conference in November 2011 and works with Literature students at Brighton to help develop their creative writing.

Those with related interests 41 profiles