Artist Robin Plummer was Dean of Faculty in Brighton from 1975 to 1989, responsible for the structure under the new polytechnic and for the Grand Parade site and its annexes. 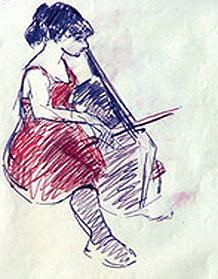 Artist Robin Plummer was Dean of Faculty in Brighton from 1975 to 1989, responsible for the structure under the new polytechnic and for the Grand Parade site and its annexes.

"Since retiring from Brighton Polytechnic I have had two exhibitions of paintings at the Coombes Collection Gallery at Shad Thames near Tower Bridge, it was good to have a gallery where I could show when I liked and which kept a selection of my work. When this gallery closed, I did not feel like trailing round other galleries with a packet of slides, and have done only a limited amount of painting since then. I have shown in mixed exhibitions including England and Co and my work recently appeared in the David Mellor Collection in Grand Designs. One of my paintings was used by Forty Thieves for one of the beautiful carpets that they have made in India. It's seven by five feet. Forty Thieves is a company belonging to Lisa O'Connor, an ex-Brighton fine art student. A painting and a portrait have recently appeared in 'Oil Paintings in Public Ownership in East Sussex'. I now mainly draw and take photographs, but am also spasmodically working on a sort of biography in art education; my career has spanned an enormous series of changes in art education, from Ministry Certificates to Doctorates.

"My association with the faculty was as Dean from 1975 to 1989. The work was onerous, as it included giving the faculty a more structured, fairer approach (in particular to student assessment and progress), establishing four new departments, five new degree programmes, postgraduate study and research, and speaking for the faculty in the polytechnic and of course outside the polytechnic as well. I was also responsible for the Grand Parade site and its annexes. This was a time when the Government was reducing funding for higher education and increasing student numbers, and it was very difficult for all concerned.   From a personal point of view this workload made it very difficult to continue with my painting. Nevertheless for most of the time it was a period of happiness for me, with good friends, colleagues and students and the pleasure of living in Brighton."