David Robson joined Brighton Polytechnic School of Architecture in early 1984. "The ethos of the School still owed much to its Arts and Crafts foundations with a structure of Beaux Art rationalism and clad with a layer of Bauhaus modernism." 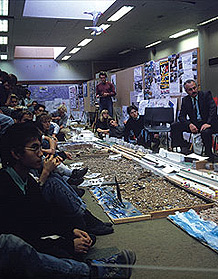 David Robson joined Brighton Polytechnic School of Architecture in early 1984. "The ethos of the School still owed much to its Arts and Crafts foundations with a structure of Beaux Art rationalism and clad with a layer of Bauhaus modernism."

David Robson was Professor of Architecture at the University of Brighton until 2004. His architectural career centred on housing: he was the chief housing architect for Washington new Town during the 1970s, and worked as an adviser to the Sri Lankan Government on its housing programme during the early 1980s. This latter experience resulted in a study of low cost housing which was published by the ODA  In 1996 he was commissioned by the Housing Corporation to undertake research on sheltered housing in the UK and published a detailed design guide (Robson, David et al. Homes for the Third Age. London: Spon 1997).

"I joined Brighton Polytechnic School of Architecture in early 1984, later becoming the leader of the Diploma Course and, eventually, the Deputy Head of School. In keeping with the fashion of the times, the School had become nominally part of the Faculty of Engineering. Although physically located away from the rest of that faculty, it developed fruitful relations with relevant parts of ‘Engineering’ and ‘Art and Design’, as well as the ‘Business School’.

"The ethos of the School still owed much to its Arts and Crafts foundations, though these had been reinforced by Head of School John Lomax with a structure of Beaux Art rationalism and clad by his successor, Stephen Adutt, with a layer of Bauhaus modernism. Under Adutt the School developed a reputation for pragmatism and professionalism and became one of the most highly regarded of the polytechnic (aka new university) schools, and for a number of years Peter Bareham’s first-year foundation course or ‘nursery’ was hailed as one of the most successful in the country. We consciously tried to avoid falling into the trap of aping the shifting fashions of the London schools and, during the 1990s, concentrated on two ends of the spectrum, establishing strong links with schools in Germany, France, the Czech Republic and the US as well as strengthening ties with the local Brighton community. The School was able profit from its spacious top-lit studios and developed a strong sense of community which focussed on open ‘crits’ in the galleries, weekly ‘public lectures’ by invited luminaries and the students’ annual satirical review. The end of the Millennium, however, signalled the end of an era for the School of Architecture, and, in a University-wide shake up, it was hitched onto a new College of Arts and Humanities and Architecture and thrown together, improbably, with ‘Fashion and Textiles’ and ‘3 Dimensional Design’.

"This seemed to be a signal for me to step aside and make way for a set of (mainly London-based) new brooms. I took early retirement in 2004, and have since worked for three years as a visiting professor in the National University of Singapore. During this time I’ve been free to focus on issues that really interest me and have published three books on the architecture of Monsoon Asia in as many years. I now divide my time between Brighton, Sri Lanka, where I’m involved with practice and teaching, and Switzerland, where my wife and I are fortunate to own a house in the mountains of Graubunden."

Those with related interests 5 profiles