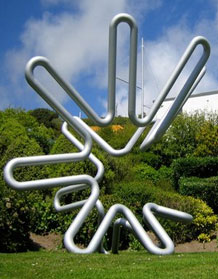 Tom Grimsey (1960-2014) was subject leader for Sculpture at the University of Brighton Faculty of Arts. He studied sculpture at Wimbledon and St Martins schools of art. Much of his practice involved working with architects, engineers and town planners to integrate large-scale art projects into the fabric of urban regeneration. These ranged from monumental sculptures animated by sequenced fibre-optic lighting to more intimate, place-shaping landscapes and planting schemes, from the curiosities of Video Buckets to large steel climbing sculptures.

In the often-problematic field of public art Grimsey endeavoured to bring innovation and colour to an unsuspecting audience and through research and public consultation to achieve consensus without compromise. To create new spaces and give identity to often unloved urban settings.

He was an artist in residence with David Massingham Dance Company, at ‘La Rectoria Centre D’Arte’ in Barcelona, at ‘Open House Community Psychiatric Centre’ in London, at ‘The Bethlem Royal Hospital’ and at ‘Burton Delingpole’ drop-forging factory in Dudley.

Perceived and actual movement in sculpture is central to Grimsey’s work. He was particularly interested in malleable polymorphic sculptures. In 2006 he received a FRSF grant specifically to explore the potential of magnetic fluids and gels, influenced by external electromagnetic fields, in the control of expressive movements in sculptural objects.

Through this work he became part of a prestigious multidisciplinary team of scientists funded by the EPSRC to develop a ‘Directed Reconfigurable Nanomachine’. His role was as the public face the group which explored this fascinating invisible nano-world, making art from this new subject where things behave differently. Everything is constantly moving, everything is sticky, attracted by gravitational and magnetic fields. Newtonian laws of physics that apply in the macro world won’t quite do and counter-intuitive laws of quantum physics come into play. The work formed the basis of an exhibition ‘Giants of the Infinitesimal’ in 2010.

In 2007 Grimsey was commissioned by the Telegraph Museum in Porthcurno to make sculptures inspired by the electromagnetic spectrum. A resulting series of 'Lisajou' wave-forms was installed in 2008.

Tom's obituary appeared in The Guardian on 2 December 2014.