Two AHRC Collaborative Doctoral Award studentships, in collaboration with the Design Museum, have been secured in the Faculty of Arts. 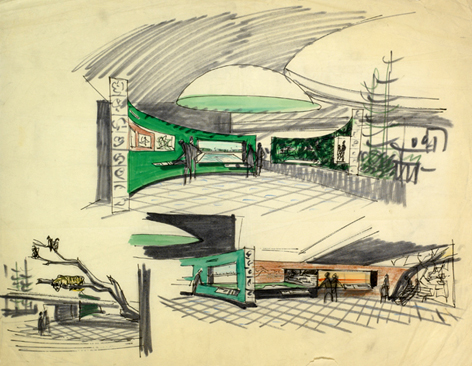 The University of Brighton Faculty of Arts, in collaboration with the Design Museum, has secured two Arts and Humanities Research Council Collaborative Doctoral Award studentships to add to its significant portfolio of postgraduate research. One of these is hosted by the Design Archives and entitled, ‘Design Strategies and the Representation of the Commonwealth: from Institute to Museum.’

Led by Curatorial Director of the Design Archives, Dr Catherine Moriarty, and co-supervised by Dr Helen Charman, Head of Learning at the Design Museum, this project presents an opportunity for a student to undertake research integral to a major development in the national design landscape, as the Design Museum plans its move from its current Shad Thames location to the Commonwealth Institute building, Kensington in 2014. The aim of the project is to explore the display strategies at the Commonwealth Institute and to investigate how designers interpreted the new political formation of the Commonwealth through the architectural space itself and by way of detailed display methodologies. It will go on to ask how the Design Museum might best inhabit a building with this heritage and how such a legacy might inform display policy in the future.

A key asset to this investigation is the survival of all the drawings pertaining to the displays representing each member state of the Commonwealth which formed the nucleus of the Commonwealth Institute interior: these now form part of the James Gardner Archive at the University of Brighton. Though the displays themselves have been destroyed, the archival resource at Brighton offers a unique record of display strategy at a key political moment. Therefore, this studentship presents an opportunity to mine an untapped source and to explore its historical significance, and to contribute in a direct way to debate about the Design Museum's future policy and the role of design in representing Britain's relationships with other countries and, in particular, its former colonies.

The second award is entitled ‘The Role Of The Design Museum In The 21st Century: National And International Perspectives.’ Led by the Director of the Centre for Research & Development (Arts), Professor Jonathan Woodham, and co-supervised by Deyan Sudjic, Director of the Design Museum., this doctoral programme will provide the successful applicant with a unique understanding of the place of contemporary design and its display in the context of cultural policy and the economy. Central to this is the fact that the Design Museum is currently seeking to establish an important working archive documenting the history of the museum in its current location on Shad Thames, London. Privileged access to key personnel and a wealth of important documentation of uncatalogued printed and visual material from past Boilerhouse and Design Museum Projects from the early 1980s to the present day will provide the doctoral candidate with a unique insight to the study of the history, motivations, policies, ambitions and influence of the Design Museum.

There will be the added opportunity to interrogate detailed information relating to the museum’s relationship with major donors, collectors and lenders, as well as its collecting policies and their development alongside its exhibitions programmes. Of particular significance as to why this PhD should take the form of a Collaborative Doctoral Award is the considerable opportunity that it provides for access to confidential discussions and the shadowing of senior staff at the Design Museum, as well as the unprecedented opportunity of participating in discussions relating to the economic aspects of the proposed move to the Commonwealth Institute in 1914. However, this doctoral application is not limited to original support into the Design Museum and the latter’s quest to underline its position as an international centre centre of excellence for the exhibition and understanding of contemporary design. Its wider significance for museum professionals and policy makers, as well as academic beneficiaries and those concerned with the social, economic and cultural impact of museums, will be underpinned by a number of fundamental research questions concerned with the wider role and purpose of design museums, with a particular focus on the acquisition and display of contemporary design.

This project is the second collaborative doctorate secured by the Design Archives, the first award in 2010 is in partnership with the Chartered Society of Designers.

Photo: One of the designs by James Gardner relating to his role as chief exhibition designer for the Commonwealth Institute. Catalogue number: GB-1837-DES-LJG-3-3-2-1.