Richard Hamilton at Tate Modern, and Jane Drew at ICA 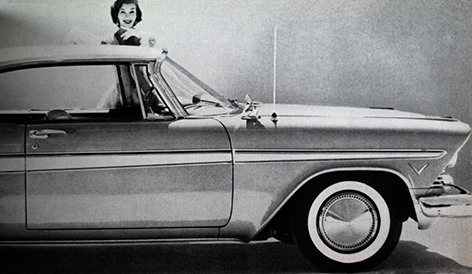 Material from the Design Archives collections can currently be seen in two important exhibitions at major London galleries.

Tate’s substantial new survey of the work of founding Pop artist Richard Hamilton includes three of our bound volumes of Design magazine, the journal of the Council of Industrial Design, from February 1968. Displayed in vitrines, the magazines show in its entirety an article by Hamilton, ‘The Persuading Image’, based on a provocative talk he had given at the ICA about consumer psychology.

Shown here is a detail of an article from Industrial Design about contemporary American car design, a manifestation of the consumer culture which so interested Hamilton: the article is known to have inspired his 1958 painting ‘Hers is a Lush Situation’ (Pallant House Gallery, Chichester).

Meanwhile, two photographs from the Design Council archive are included in a new assessment of the work of the architect Jane Drew, now showing at the Institute of Contemporary Arts (ICA). In the early part of her career, Drew was a proponent of ergonomic kitchen design, and one photograph shows a kitchen designed by Drew and her husband and partner Maxwell Fry for the ‘Britain Can Make It’ exhibition in 1946. The other image is a location shot of the Festival of Britain, 1951, showing the Schools Pavilion, also designed by Fry and Drew.

‘Richard Hamilton’ is at Tate Modern until 26 May, and ‘Jane Drew’ is at the ICA’s Reading Room until 23 March.