Collections are showcased in London and Germany 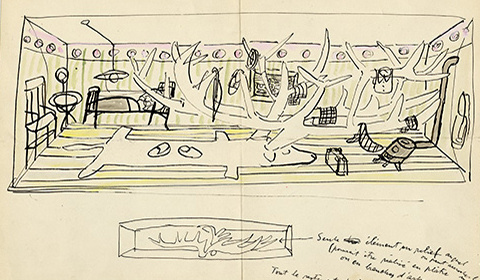 As the display of Council of Industrial Design educational folios reaches the final days of its run at the Margaret Howell store in Wigmore Street, two further exhibitions introduce the wealth of our collections to new audiences, bringing to fruition a busy summer of preparations by our paper conservator Sirpa Kutilainen, who administers and co-ordinates our loans.

The exhibition at Margaret Howell complements the launch of their 2019 calendar featuring the the folios, and is produced once again to raise funds for the charity 'Open City’. It follows the success of the exhibition and 2017 calendar which contained a selection of Design Council posters.

Meanwhile, material about retail display from the Natasha Kroll Archive appears in 'Atelier EB: Passer-by’ at the Serpentine Sackler Gallery, until January 2019; and pieces from the ICSID Archive are incorporated into the exhibition ‘Victor Papanek: the Politics of Design’, at the Vitra Museum, Weil-am-Rhein, until March 2019.