Design Archives are largest lender to exhibition of émigré design 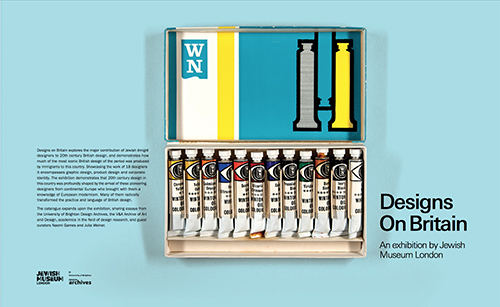 The University of Brighton Design Archives has lent 35 works to a major exhibition opening next week at the Jewish Museum in London. The exhibition considers the significant influence of Jewish designers who migrated from other parts of Europe during the twentieth century, escalating the influence of continental modernism on design in Britain. The Design Archives holds the archives of six such designers, of whom four are featured in the show - graphic and information designers FHK Henrion, Willy de Majo, H A Rothholz and Dorrit Dekk.

Of the four, Henrion is perhaps the best known, for his wartime propaganda work for the Ministry of Information, including posters and exhibitions, as well as his later corporate identity designs including Tate & Lyle, the National Theatre and KLM, all of which are still in use today after several decades. Both Henrion and De Majo were closely involved with the international design organisation Icograda, whose archive is also at Brighton.

Lesley Whitworth and Sue Breakell have contributed a chapter for the exhibition catalogue, and will speak at an associated conference at the V&A on 30 November: https://www.vam.ac.uk/event/dGazedXq/designs-on-britain-jewish-emigre-designers-nov-2017