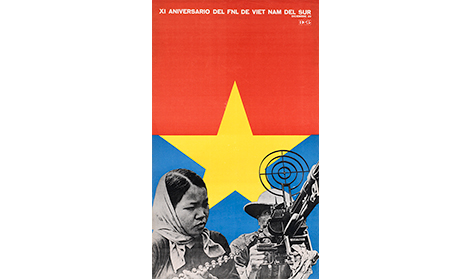 Taking a poster held within the University of Brighton Design Archives as a starting point, this display considered how photography was incorporated in graphic contexts as part of campaigning strategies in opposition to US intervention in Vietnam. This conflict was identified as emblematic of struggles against imperialist aggression worldwide: as Che Guevara famously described in 1967, ‘we could look into a bright future should two, three or many Vietnams flourish throughout the world.’ The internationalist perspective at the heart of the Cuban political agenda was a key determinant in the designs produced to encourage solidarity.

This display included posters produced by two Havana-based organisations responsible for publishing some of the most distinctive political graphics of the late 20th century: the Organización de Solidaridad con los Pueblos de Asia, Africa y América Latina (the Organisation for Solidarity with the People of Africa, Asia and Latin America, OSPAAAL) and the Organización Continental Latinoamericana y Caribeña de Estudiantes (the Continental Organisation of Latin American and Caribbean Students, OCLAE).

‘Designs for Solidarity: Photography and the Cuban Political Poster 1965-1975’ an exhibition for the Brighton Photo Biennial 2008. Essay of the same name published in Photoworks Magazine, no. 11, Autumn/Winter 2008, pp. 58 – 63. Download pdf