The Electrical Association for Women 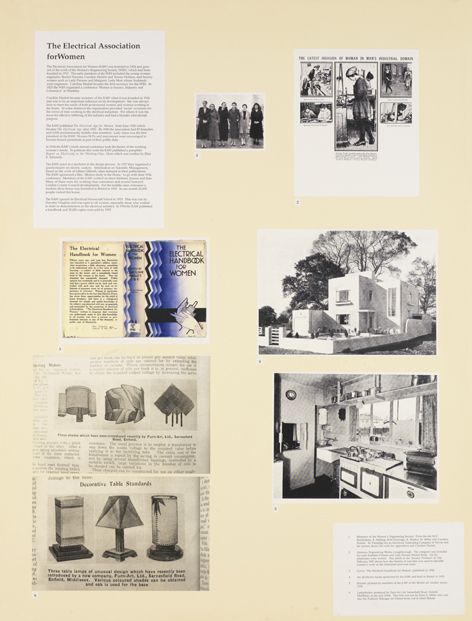 The Electrical Assocation for Women (EAW) was founded in 1924 and grew out of the work of the Women's Engineering Society (WES), which had been founded in 1919. The early members of the WES included the young women engineers, Rachel Parsons, Caroline Haslett and Verena Holmes, and Society women such as Lady Parsons and Margaret, Lady Moir whose husbands were engineers. Caroline Haslett became the first secretary for the WES. In 1925 the WES organised a conference 'Women in Science, Industry and Commerce' at Wembley.

Caroline Haslett became secretary of the EAW when it was founded in 1924 and was to be an important influence on its development. She was always keen to meet the needs of both professional women and women working in the home. In some instances the organisation provided 'social' occasions for the wives of men working in the electrical industries. For others it was the focus for effective lobbying of the industry and had a broader educational purpose.

The EAW published The Electrical Age for Women from June 1926 which became The Electrical Age after 1932. By 1940 the association had 85 branches and 9,000 predominantly middle-class members. Lady Astor was the first president of the EAW. Women M.P.'s and mayoresses were encouraged to become branch presidents as part of their public duty.

In 1934 the EAW's ninth annual conference took the theme of the working woman's needs. To publicise this work the EAW published a pamphlet Report to Electricity in the Working-Class Home which was written by Elsie E. Edwards.

The EAW acted as a mediator in the design process. In 1927 they organised a questionnaire on the electric cookers. Information on Scientific Management, based on the work of Lillian Gilbreth, often featured in their publications. The EAW sponsored a film, 'Motion study in the Home', to go with their 1936 conference. Members of the EAW worked on the show kitchens, houses and flats. Many of these were for working-class consumers and several featured London County Council developments. For the middle-class consumer a modern show house was furnisehd in Bristol in 1935. In one month 20,000 people visited this house.

The EAW opened its Electrical Housecraft School in 1933. This was run by Dorothy Vaughan and was open to all women, especially those who wished to train as demonstrators in the electrical industry. In 1934 the EAW published a handbook and 30,000 copies were sold by 1935.

Image captions left to right from the top
1. Members of the Women's Engineering Society. From the left M.D. Rowbottom, B. Shilling, M.M. Partridge, K. Bunker, M. Willis and Caroline Haslett. M. Partridge ran an Electricity Generating Company in Devon and the pocture show her with her apprentices and Caroline Haslett.
2. Atlanta Engineering Works, Loughborough. The company was founded by Lady Kathleen Parsons and Lady Eleanor Shelley-Rolls. All the employees were woman. This article in the 'Sunday Pictorial' of 13th February 1921 shows how the rhetoric of war-time was used to describe women's work in the immediate post-war years.
3. Cover, 'The Electrical Handbook for Women', published in 1934.
4. An all-electric house sponsored by the EAW and built in Bristol in 1935.
5. Lampshades, produced by Furn-Art Ltd, Sarnesfield Road, Enfield, Middlesex in the mid 1930s. This firm was run by Nora E. Miller who was also the Publicity Manager for Edison-Swan Ltd in Great Britain.
6. Kitchen planned by members of the EAW in the Bristol all-electric house, 1935.