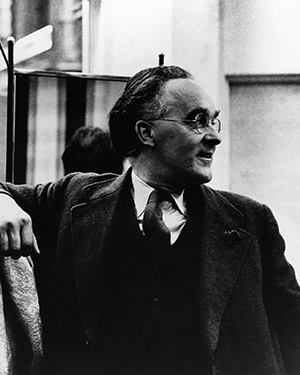 In 1931 he started work at Morton Sundour Fabrics Ltd, part of his family’s textile manufacturing company, before moving to Edinburgh Weavers - a research unit established by his father to pioneer fabric design in keeping with contemporary architecture and interior decoration. Morton commissioned designs from Lucienne Day RDI, Duncan Grant RDI and Ashley Havinden RDI, among others, and he produced a range of ‘constructivist’ fabrics.

As an artist, Morton was one of the small group in pre-war Britain to champion abstract work in a modernist style. His paintings were first exhibited at the ‘Living Art in England’ exhibition at the London Gallery, and ‘Abstract Paintings by Nine British Artists’ at Lefevre Gallery, in 1939. After the war he also created botanical drawings.

His delicate health prevented Morton from taking an active role in the Second World War. Instead he was a photographer for the National Buildings Record. During the winter of 1943-44 Morton studied handweaving and spinning with Ethel Mairet RDI, where he met Marianne Straub RDI. From 1947 to 1954 he designed a popular, and critically acclaimed, series of dress prints for Horrockses Fashions Ltd.

Although in its infancy Edinburgh Weavers textiles featured at the first Dorland Hall exhibitions. At the British Art in Industry exhibition organized by the Royal Society of Arts (RSA) and the Royal Academy (RA) in 1935, Morton not only showed 41 examples of Edinburgh Weavers textiles but he also supplied curtains for one of the specimen rooms. Britain Can Make It (1946) provided an opportunity for Morton to demonstrate his newly launched Unit Prints, a system of screen prints that could be mixed and matched at will. As well as contributing to the displays for the Festival of Britain (1951) Morton was commissioned to produce the textile hangings for the boxes at the Royal Festival Hall. Morton believed firmly in design as the measure of national stability. He said, ‘we cannot expect well designed fabrics in an unstable or badly designed society’.

An assessor for textiles for the four central Scottish art schools Morton became increasingly concerned with the state of design education. In 1944 the Design and Industries Association, with the Cotton Board, commissioned Morton to enquire into the state of textile design. The Royal College of Art (RCA) awarded Morton an Honorary Diploma in Design Education (1954) and the following year he was made a Fellow of the Society of Industrial Artists and Designers (SIAD). In his tribute for The Times Sir Gordon Russell RDI described Morton as a valued member of the Council of Industrial Design.

Introducing new RDIs to the RSA in 1960, the Master of the Faculty, Robert Goodden, said that under Morton’s guidance and example Edinburgh Weavers had produced ‘furnishing fabrics to a faultless standard of progressive, fascinating and often bold design… when Wells Coates RDI and his colleagues were engaged in what proved to be the action of break-through in their campaign for design true of our time, Alastair Morton and Edinburgh Weavers were already there with the materials they could use.’ Goodden added that Morton had just been accorded the Royal Warrant.

Morton’s achievements were celebrated after his death when, in March 1964, the Duke of Edinburgh presented a posthumous Award for Achievement in recognition of ‘the absolute integrity which he projected into his work, and for his steadfast conviction that the arts can be successfully enlisted by commerce’. Sir Gordon Russell wrote in The Times that ‘it is to be hoped that manufacturers will pay increasing attention to his example’. Morton, he said, was a rare man, ‘his true humility, friendliness and generosity made it possible…for him to recognize, employ and encourage other designers’.

Morton is featured in the Britain Can Make it Exhibition catalogue as follows:
To view and search the catalogue online, please visit our digital document library.

To learn more about the work of Alastair Morton, his relationships with other designers, and further resources, visit the Exploring British Design prototype web portal.

Image courtesy of the RSA.