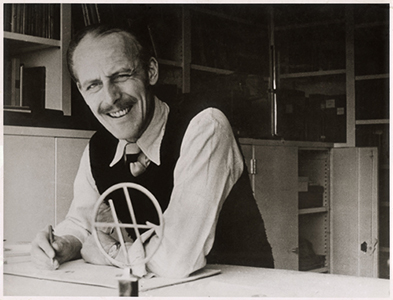 Ashley Havinden was born on 13th April 1903 at Maidstone, Kent. He was awarded a free education at Christ’s Hospital, Horsham, Sussex but left school without any formal qualifications. He started work as a trainee at a printing company in Watford, and then, at the age of nineteen, joined the staff of the advertising agency W.S. Crawford, where he remained for the whole of his career, becoming their Art Director in 1929 and eventually Vice-Chairman of the company. He encouraged Crawford to employ Edward McKnight Kauffer HonRDI. Influenced by Stanley Morison RDI and Jan Tschichold RDI, Havinden designed a font for Monotype in 1930 known as ‘Ashley Crawford’. Later he immortalized his own handwriting in the font ‘Ashley Script’ (1955).

Havinden had attended evening classes at the Central School of Arts & Crafts and in 1933 he received further lessons in drawing from the sculptor Henry Moore and became friends with Ben Nicholson, Barbara Hepworth, Paul Nash and other pioneers of the Modern Movement. The London Gallery held his first solo exhibition in 1937 and two years later he was one of the nine British artists whose work was featured in an Exhibition of Abstract Paintings held at the Lefevre Gallery, London.

His continuously impressive and distinctive output of ideas, dynamic layouts and finished work (usually signed ‘Ashley’) was characterised in advertisements he created for many important clients including Martini, Yardley and Gillette. A poster for the Milk Marketing Board was much admired by Walter Gropius HonRDI, during a visit to London in 1934. Havinden created a house style for Simpson of Piccadilly, Liberty’s store in Regent Street and KLM airlines. Alistair Morton RDI commissioned textile designs from Havinden for Morton Sundour Fabrics. His modernist paintings adapted easily to furnishing fabric and rugs, as well as dress fabrics for the House of Worth. He was a member of the Display Committee for the British Pavilion at the 1937 Paris Exposition, designed the catalogue for the 1938 Modern Architectural Research Group (MARS exhibition) and, as well as the poster advertising the exhibition, Havinden also designed the Men’s Wear section, and sat on the selection panel for Men’s Clothes, Cloths and Accessories for Britain Can Make It in 1946. Havinden was also instrumental in bringing the first exhibition of the Alliance Graphique Internationale (AGI) to London in 1956 (subsequently elected their President d’Honneur).

At the outbreak of the Second World War Havinden enrolled in the Highgate Home Guard Battalion and designed posters for the ARP and War Loan advertisements for the Ministry of Information. He then joined the army camouflage section. On his promotion to Captain in 1943 he was transferred to the Petroleum Warfare Department to work on ‘Pluto’, the petrol pipeline project to the Normandy beaches.

Havinden did much to foster education for design and its professional standards.  He was a founder member, and later President, of the Society of Industrial Artists and Designers, President of the Creative Circle and the Double Crown Club, twice Chairman of the London College of Printing, Governor of Chelsea College of Arts and Governor of the Central School of Arts & Crafts. In 1961 Manchester Regional College of Art awarded Havinden an Honorary Doctorate of Arts. He also wrote Line Drawing for Reproduction (1933) and he published Advertising and the Artist (1956). For his services to industrial design Havinden received the OBE in 1951.

Havinden took an active interest in the work of the RSA. In the year he was appointed a Royal Designer for Industry (RDI) in 1947, he gave a talk on the ‘Effect of Advertising on Commercial Design’. Havinden took responsibility for the publicity for the ‘Design at Work’ exhibition, organized by the RSA with COID and the Faculty, held at the Royal Academy in 1948. Later that same year, he joined other RDIs on a visit to Sweden, and in 1952 accepted the invitation from the Deutscher Werkbund to attend their Darmstadter Gesprach.  Following the death of former RDI Master Percy Smith the Faculty deputed Havinden to select and arrange a memorial exhibition of his work, held in 1950.

Havinden increasingly helped the RSA with advice on their typography, participated at lecture meetings and most importantly through his support for the RSA’s Industrial Design Bursaries competition. He served on the main board and, over the years, either as Chairman or a juror for five different sections, notably that for advertising design. When he was appointed Master of the Faculty of RDIs (1967-69) Havinden gave valuable advice to the committee supervising the redesign of the Society’s Journal, for which he had written obituaries for poster designers, and RDIs, Fred Taylor and Tom Purvis, as well as Edward McKnight Kauffer. He also wrote a fulsome review of the memorial exhibition of Kauffer’s work, presented by SIAD, with the support of the RSA, and held at the V&A Museum in 1955.

John Gloag wrote an appreciation of ‘one of the most distinguished pioneers of industrial design’ for The Times. He wrote that Havinden ‘will long be remembered…for the inspiring encouragement he gave to innumerable young artists and designers, for he was a great impresario of talent and took infinite trouble to find or make opportunities for designers of promise’.

Havinden is featured in the Britain Can Make it Exhibition catalogue as follows:
To view and search the catalogue online, please visit our digital document library.

To learn more about the work of Ashley Havinden, his relationships with other designers, and further resources, visit the Exploring British Design prototype web portal.