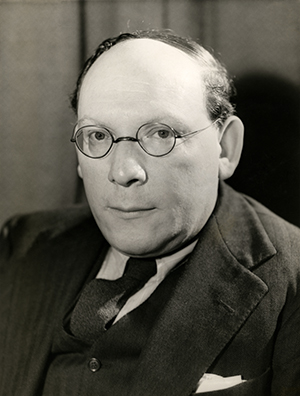 The son of Russian Jewish emigrés, Barnett Freedman was born in London on 19th May 1901. Due to persistent ill health Freedman had hardly any schooling, and from the age of nine he spent most of his time in hospital. He read widely, taught himself to draw and to play the violin. By the time he was fifteen his health had improved sufficiently for him to work as an office boy, and then as a junior draughtsman to a monumental mason, and later in an architect’s office. Determined to make up for his lack of formal education Freedman attended evening classes at St Martin’s School of Art. Thanks to the intervention of William Rothenstein, then Principal of the Royal College of Art (RCA), the London County Council awarded Freedman a scholarship to enable him to study full time under Paul Nash at the college (1922-25). Fellow students, (including future RDIs Edward Bawden and Enid Marx) who gave him the name of ‘Socrates’, soon abbreviated to ‘Soc’ because of his precocious sagacity.

For the first few years after leaving college Freedman found it difficult to find work. In 1927 he illustrated his first book, Wonder Night by Laurence Binyon for Faber & Faber and over a period of twenty five years the company commissioned further illustrative work and book jackets. He also carried out a wide range of works for the Curwen Press, the Sylvan Press and for the Baynard Press for whom he also designed the ‘Claudia’ typeface. Freedman’s skill with auto-lithography led to poster designs for Shell-Mex, BP, London Transport, the Post Office, Ealing Studios and the BBC. He oversaw the production of the series of large-scale lithographic prints for Guinness, as well as for Lyons teashops throughout Great Britain. Invited to design a biscuit Freedman not only fulfilled the brief he also reorganized the manufacturer’s whole packaging and distributing machinery. His design for the 1935 Silver Jubilee commemorative stamp, the first of its kind in this country, brought Freedman to the attention of the wider public.

During the Second World War Freedman served as an official war artist with the British Expeditionary Force in France, and then with the Admiralty on the long and dangerous Russian convoys. In June 1944 he was sent to Normandy to record the landing beaches and invasion headquarters. The Imperial War Museum holds an extensive range of the scenes and portraits he painted. In recognition of this work Freedman was appointed CBE (1946).

An exhibitor at British Art in Industry exhibition (1935) organized by the Royal Society of Arts (RSA) and the Royal Academy (RA), and for Britain Can Make It (1946) where he also served on the selection committee for toys, Freedman submitted a prize winning design for the Festival of Britain poster competition (1951).

Freedman had maintained his connection with the RCA as an instructor, a member of the College Council (1952-55), and latterly as an Honorary Fellow. At the invitation of Albert Rutherston, Freedman also taught, as a visiting master, at Ruskin School, Oxford.

Elected a Fellow of the RSA in 1939, Freedman was appointed a Royal Designer for Industry in 1947. With Milner Gray RDI he chose the winners, and wrote the report, for the RSA’s Percy Smith Memorial Competition for Lettering and Calligraphy in 1950. In his Master’s address on taste, ‘The Seeing Eye’, Francis Meynell remarked that, ‘there are nine muses and three graces and twelve gifts of the Holy Ghost – but there is only one Barnett Freedman’.

A number of his friends responded to The Times obituary that, while it had admirably covered his remarkable career in the face of poverty and ill health, they felt it had not captured the personality of the man. These comments described Freedman as a man ‘small in stature, pungent in conversation, he had the wit of the cockney and the deep kindly sympathy of his race’;  ‘a delightful though very provoking conversationalist, and lively broadcaster’; ‘his great talents…will be sadly missed in the field of commercial and industrial design, in the publishing and printing worlds, and most of all among his wide circle of friends in all walks of life’. Robin Darwin wrote that ‘no one, either as a member of the staff of the RCA, or of its council, or as a Fellow, can have done more than he to stimulate and, in need, to comfort and support his colleagues and his students’. The Arts Council took up Darwin’s suggestion for a memorial exhibition, held in 1958, to show the remarkable variety of Freedman’s talent and skill. His friend of twenty years, Sir Stephen Tallents wrote the introduction to the catalogue for a second exhibition of Freedman’s paintings, drawings and lithographs held in 1984. Six years later, Manchester Metropolitan University put on a show of his work.

Freedman is featured in the Britain Can Make it Exhibition catalogue as follows:
To view and search the catalogue online, please visit our digital document library.

To learn more about the work of Barnett Freedman, his relationships with other designers, and further resources, visit the Exploring British Design prototype web portal.