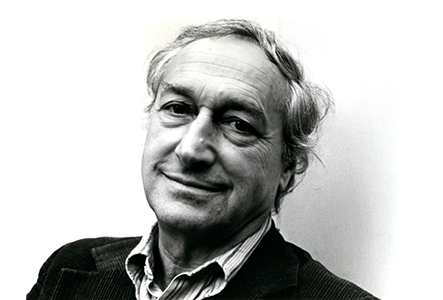 Born Henrich Frederick Fritz Kohn in Nuremberg, Germany on 18th April 1914 to Franco-German parents, Henrion (as he became known) completed his education at the Melanchthon Gymnasium before moving to Paris in 1933 where he trained as a textile designer and then studied graphic arts at the Ecole Paul Colin. Colin described Henrion as one of his best students, a quick and interested learner, who had a great imagination and an eclectic talent. With the advance of the Nazi menace Henrion first made his way to Tel Aviv before coming to London in 1936, where he remained for the rest of his life.

At the outbreak of the Second World War Henrion, although Jewish, was caught up in the anti-German hysteria and interned, but his reputation was such that the Joint Secretary of the Artists’s Refugee Council wrote in his defence that ‘his experience and talent as a propaganda artist could be of great service to the country, to which his loyalty is beyond question’. Released in 1940 he went to work for the Ministry of Information (MOI) and the US Office of War Information. With Abram Games RDI, Henrion designed posters to help with the war effort. Although the two men had entirely different approaches to their work, Henrion used photomontage while Games favoured airbrush techniques, the two men became lifelong friends. Games recorded that ‘the many splendid posters carrying his [Henrion’s] signature are evidence of his prowess in that difficult field’ and resulted in many memorable works, such as Dig for Victory.

As a result of his earlier work with the Industrial Design Partnership for the Modern Architectural Research Group (MARS) exhibition, the Empire Exhibition, Glasgow (1938) and the New York World Fair (1939) the MOI gave Henrion the task of designing most of the war-time exhibitions for the Ministry of Agriculture. As well as displaying printing and packaging design Henrion also exhibited a portable, aluminum, electrically driven sewing machine for the ‘Designers Look Ahead’ section at Britain Can Make It (1946). For the Institute of Contemporary Arts Henrion turned the basement of the Academy Cinema in Oxford Street into an exhibition space for ’40,000 years of Modern Art’ (1948). He received an MBE (upgraded to an OBE in 1985) for the two pavilions he designed for the Festival of Britain (1951) and his design for ‘Keep Britain Tidy’ (1964) was described as ‘both a beautiful and moving exhibition as well as a grim and hideous warning’ and as one of his ‘finest and brilliant designs’. Working closely with RDIs Basil Spence and James Gardner on the British Pavilion for Expo 67 in Montreal, Henrion had responsibility for the internal layout. He also added the three-dimensional Union flag at the top of the tower and the ten-foot high lettering around the outside of the pavilion.

As well as his involvements for exhibitions Henrion worked as a consultant art director for a number of publishing companies and designed books covers and point of sale advertising for Penguin (1965-68). He designed logos, got involved with companies ‘house magazines’ and pioneered the development of corporate identity, for a client list that included British Rail, KLM, London Transport, Olivetti, Braun,Tate & Lyle, Girobank, the London Electricity Board, the National Theatre and the Post Office. On receiving the Royal Society of Arts (RSA) Presidential Award for Design Management in 1971 the Chairman of BEA said, that they owed much of their success to Henrion’s design concept for the company.

As an educator Henrion worked with Manchester, North East London and Leicester Polytechnics, with Canterbury and West Sussex College of Art and the Central School of Arts & Crafts. When Henrion was a visiting lecturer at the Royal College of Art (RCA) in the 1950s one of his students and future RDI, David Gentleman recalled that Henrion combined charm and encouragement with being ‘sharply exacting if anyone was sloppy or lazy’. At the London College of Printing, where he also lectured, the retiring Head of Graphic Design, Tom Eckersley RDI, persuaded Henrion to take over his post. Henrion travelled widely, lecturing in Europe, Japan, Russia and the United States. For seventeen years he organized the student seminars for the International Council of Graphic Design Associations (ICOGRADA) and was presented with their Design Excellence Award in 1989.  He also served as Chairman of the Graphic Design Board for the Council for National Academic Awards (1971-77).

An early member of the Society of Industrial Artists and Designers (SIAD) he served as their President in 1963 and was awarded the SIAD Design Medal in 1976. One of the eight founder members of the Alliance Graphique Internationale (AGI) Henrion was appointed their International President from 1963 to 1966. One of his last major tasks, although in poor health, was the editing and production of the AGI Annual 1989. Henrion served, with Jack Howe RDI and others, on the Design Council’s selection panel for the Design Centre ‘Designs of the Year’ award (1959).

Sir Kenneth Clark, as Chairman of the Arts Council and of the Independent Television Authority, welcomed the ‘far-sightedness and the sense of his own times to apply his mind to the problem of television’ when he chaired Henrion’s talk, on ‘Design for Television’, at the RSA in 1956. Three years later Henrion was appointed a Royal Designer for Industry (RDI). The Master, Robert Goodden RDI, introduced Henrion to the RSA as someone who has ‘done much for the organization of his profession and much for the training of those intending to enter it.’ As Master of the Faculty (1971-73) Henrion gave an oration on vision, which he titled ‘I Eye, Sir’. As well as serving as a jury member for the RSA’s Student Design Bursaries Competitions from 1975 to 1983, Henrion took the chair at the RSA when his old friend, Abram Games, gave a talk on the ‘Poster in Modern Advertising’ (1962), and he took part in the RSA Fellows’ Discussion Group on Public Relations and Modern Society (1972).

Henrion is featured in the Britain Can Make it Exhibition catalogue as follows:
To view and search the catalogue online, please visit our digital document library.

To learn more about the work of FHK Henrion, his relationships with other designers, and further resources, visit the Exploring British Design prototype web portal.