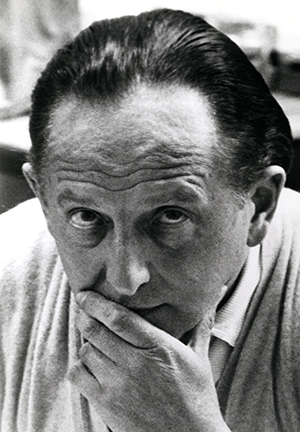 Born on 29th December 1898 in Kempen, Prussia to Jewish parents, Schlesinger shortened his surname to Schleger when he was twenty years old, after his family moved to Berlin in 1904. He attended the Kunstgewerbeschule to study painting and drawing (1918-21) and took a strong interest in the principles of the Bauhaus.

His first job was as a publicity manager and film set designer in Berlin. In 1924, with limited English, very little money and no contacts, Schleger went to New York where he worked as a magazine paste-up artist and freelance advertising designer. He adopted the signature Zero, a wry comment on his status as a designer. In 1926 Gebrauchsgraphik described this graphic artist as a ‘wunderkind…of all the post-war émigré artists’ he was the most successful. Three years later he returned to Berlin to work for the German office of W.S. Crawford.

Schleger arrived in England in 1932 where his contacts among Crawford’s modernist designers, notably Edward McKnight Kauffer RDI and Ashley Havinden RDI, helped establish him at the centre of London’s avant-garde design community. Schleger did much to spread the visual language of modernism in Britain, one example is the famous London Transport bus-stop sign commissioned by Frank Pick in 1935. As a result of this success Schleger decided to stay in Britain and he became a naturalized citizen in 1939.

During the Second World War he designed propaganda posters, including ‘Grow Your Own’ for the Dig for Victory campaign. Christian Barman RDI, as Publicity Officer for London Transport, commissioned Schleger to design posters to encourage passengers to take more care during the blackout. After the war he worked as a consultant to Mather and Crowther, where he met F.H.K. Henrion RDI, before founding his own company Hans Schleger & Associates in 1953. He designed corporate identities for many of his clients, these included MacFisheries, BP, ICI, John Lewis, Finmar Furniture and Grants Whisky. For twelve years he designed the graphics for the Edinburgh Festival (1966-78).

Guest lecturer at Chelsea Polytechnic, Central St Martins, Royal College of Art (RCA) and the Regional College of Art, Manchester, Schleger also lectured worldwide and spent a year in Chicago as a Visiting Professor at the Institute of Design.

In his 1948 lecture to the RSA, ‘Advertising and Commercial Design’, Ashley Havinden RDI, said that ‘with great imagination and ingenuity Zero used Surrealism…to express the complexities of chemical reaction in a dramatic pictorial way…the text type is a 16th century derivative; the pictures are late 19th century engravings. Yet the originality of the total effect conveys the impression that Shell products are…very much up to date!’. A decade later the Master of the Faculty, Robert Goodden, introduced Hans Schleger to the Royal Society of Arts (RSA) and said that this new Royal Designer for Industry [RDI] had ‘achieved high eminence in the field of package design, posters and exhibition display. He has the skill to harness a most sensitive and discriminating talent to the forthright business of the market place’. Schleger designed a Christmas card for the RSA in 1970.

Stefan Buzas RDI wrote an appreciation of his friend, for the RSA Journal, in which he said that Schleger had an ‘exceptional gift for being able to combine the intellectual with the visual'.

Schleger is featured in the Britain Can Make it Exhibition catalogue as follows:

To learn more about the work of Hans Schleger, his relationships with other designers, and further resources, visit the Exploring British Design prototype web portal.