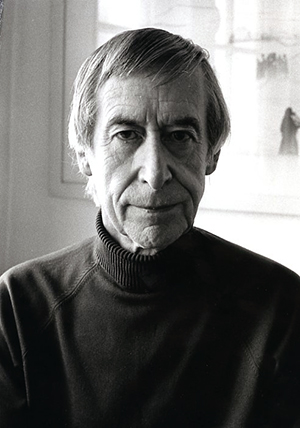 Poster artist and design teacher Thomas (Tom) Eckersley was born in 1914 at Newton le Willows, Lancashire and educated at Salford College of Art where he was awarded the Heywood medal for best student. He, and a fellow student, Eric Lombers, set up in partnership and moved to London in 1934 where they designed posters for Austin Reed, Shell, London Transport and others. At this time Eckersley was also Visiting Lecturer in Graphic Design at Westminster School of Art (1937-39). The war effectively marked the end of the partnership as the two men joined different military services. Eckersley worked for the RAF as a cartographer before moving to the Publicity Section of the Air Ministry and he was granted an Order of the British Empire (OBE) for services to poster design in 1948. Although continuing restrictions affected commercial advertising Eckersley was able to gain commissions from Gillette, Guinness, the Post Office and the Royal Society for the Prevention of Accidents. He designed illustrations for two books; his wife’s, Cat O’Nine Lives (1946) and for E.A. Cabrelly, Animals on Parade (1947).

In spite of a busy freelance career Eckersley also found time to teach. He set up Britain's first undergraduate design course at the London College of Printing (LCP, now London College of Communication) as well as publishing Poster Design in 1954. Three years later Eckersley was appointed the Head of the Department of Design at the LCP, a post he held until his retirement in 1977.

Eckersley’s role as ‘godfather’ of graphic design was recognized by his election to the International Society of Typographic Designers; membership of the Alliance Graphique Interationale (AGI) in 1952 and his appointment as a Royal Designer for Industry (RDI) in 1963. The Chartered Society of Designers presented him with their greatest accolade in 1990, the Minerva Medal. Eckersley was also appointed an Honorary Fellow of the Royal College of Art (RCA) and of Manchester College of Art and Design.

Eckersley’s posters have been the subject of a number of retrospective exhibitions: Camden Arts Centre (1980); British Gallery, Yale University (1981); London Transport Museum (1986) and the London Institute (1997). He also co-hosted an event on poster design with FHK Henrion held in Essen (Germany) in 1993.

Eckersley is featured in the Britain Can Make it Exhibition catalogue as follows:

To learn more about the work of Thomas Eckersley, his relationships with other designers, and further resources, visit the Exploring British Design prototype web portal.