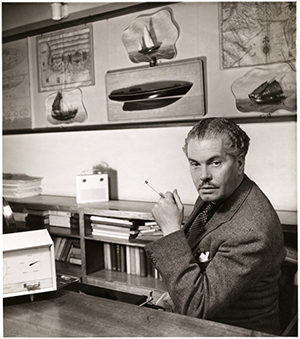 Born on 17th December 1895 of Canadian parents in Tokyo, Japan Wells Coates was educated informally by his mother, who had trained as an architect, and he also learnt calligraphy and craft skills from Japanese scholars. At the age of seventeen he joined his father and a family friend on a world cruise before the family moved to Canada. He collaborated with his mother on the design of the family home in Vancouver in 1913, but he chose to study engineering when he enrolled at McGill University in the autumn of that year.

The First World War interrupted his studies. He signed up, firstly with the 2nd division of Canadian gunners, then the Royal Flying Corps, although he never saw action as the war ended just as he concluded his training as a pilot. Coates returned to McGill and graduated with first class honours for the combined BA and BSc degree, which he then followed with a PhD (engineering) from London University in 1924.

Coates settled in Fitzroy Square. During a journalistic assignment in Paris where he saw the work of Le Corbusier at the 1925 Paris Expo he started to develop a strong interest in modernist concerns and became friends with the architect Maxwell Fry. Coates transformed his bedsit with the use of plywood and aluminum and, in 1928, he designed the interior of a shop for Crysede silks. Modernist textile entrepreneur, Tom Heron, commissioned Coates to plan the internal layout of his Cresta Silks factory in Welwyn Garden City (1929), and then to design a number of shops for his company. The use of glass, plywood and steel, standardized shop fittings, and the coherence of his detailing, set new standards of retail design. His best-known and most influential project, Lawn Road Flats in Hampstead (1934) was developed in collaboration with committed patrons of modernist architecture and design, Jack & Molly Pritchard. Together they formed a new company, Isokon. Coates ideas for modern living in these minimum spaces informed his designs for built-in furniture and fittings. The kitchen for one of the flats was shown at the  ‘Industrial Art in Relation to the Home’ exhibition (1933). Bauhaus émigrés, including Walter Gropius RDI, were early residents at Lawn Road and they embraced Coates and his work. He designed Embassy Court (1935), an eleven-storey block of flats with verandas and sun terraces, on the sea front at Hove. However, his main ambitions lay in revolutionary low-cost mass housing by means of prefabricated aluminum structures. ‘Sunspan’, a two-storey house designed to allow the maximum amount of sunlight into the building, was shown at the Ideal Home Exhibition in 1934.

His background in engineering and his experience in the design of commercial spaces meant that Coates was the ideal designer for the BBC's technical studios. He demonstrated his understanding of saleable design and manufacturing process when he produced radio cabinets for Ekco made with a new material – Bakelite. His circular design, AD65 featured in the Radiolympia exhibition (1934).

In 1933 Coates showed his commitment to the modernist cause by helping to found Unit One, a pressure group of avant-garde artists and architects. Coates also came up with the name for a British organization to support modernist architects, which he helped to found in the same year - MARS (Modern Architectural Research) Group. As well as writing articles for the press Coates also took part in radio broadcasts to promote modernist design.

During the Second World War Coates was transferred from the RAF to advise the Aircraft Industries Research Organisation on Housing (AIROH) on the development of all-aluminum prefabricated bungalows. At the conclusion of the war Coates developed his most potentially revolutionary scheme for standardized, prefabricated, lightweight, interchangeable mobile room units. However, he failed to find financial backing for his ‘Rooms in a Garden’ and ‘Rooms in a Frame’. With no major commissions Coates looked to Canada for the opportunity to demonstrate his vision. Plans for a new town, Iriquois, to be built on the St Lawrence seaway came to nothing, although he was involved with the redevelopment of parts of Vancouver and the abortive design for a mass rapid transit system of his own invention. The experience of teaching architecture and urban design at Harvard University (1955-56) led Coates to develop plans for a new sort of Canadian design school.

In 1944 Coates was appointed OBE (military class) for his service to the RAF. In this same year Coates was elected a Royal Designer for Industry (RDI). He served as a jury member on the RSA’s 1946 Industrial Art Bursary competition for pressed glass, and in 1947 on the jury for open/closed stoves. As Master of the Faculty (1951-53) Coates served on the RSA’s Papers and Medals Committee, and organized a lunch held by the Faculty to celebrate the 80th birthday of a former Master, Sir Ambrose Heal.

Coates also tried his hand at boat designs. The model of his Wingsail cataraman, which he exhibited at Britain Can Make It (1946), was much admired but never developed. Also on display was a small bedside radio set with an inbuilt alarm clock. For the Festival of Britain (1951) Coates designed what became one of the most popular attractions, the ‘Telekinema’. This was the first cinema in the world designed to show both films and television and when the Festival closed the building was saved and became the National Film Theatre.

In his obituary of Coates for the RSA Journal, fellow modernist architect and furniture designer Dick Russell RDI and Master of the Faculty wrote that ‘to the great sadness of [his] many friends and admirers…his unlimited promise was never quite fulfilled, but he lives on in a small number of the best buildings and designs of his age, and in his tremendous influence upon younger architects and designers’ and John Gloag added his own tribute and said that Coates ‘was a purist who despised compromise’. He added that to have ‘known him was a privilege; to have argued with him was a stimulating and unforgettable experience. He has left a mark on the development of contemporary architecture in England and…profoundly influenced the ideas of many of his contemporaries and successors'.

While swimming off Vancouver beach Wells Coates died at the age of 66 on 18th June 1958.

Coates is featured in the Britain Can Make it Exhibition catalogue as follows:

To learn more about the work of Wells Coates, his relationships with other designers, and further resources, visit the Exploring British Design prototype web portal.