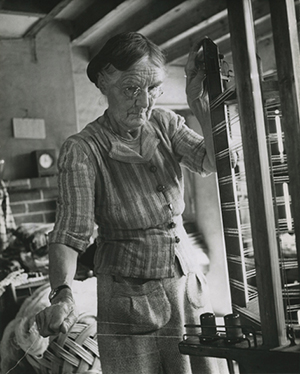 Born in Barnstable, Devon, Ethel Mairet was a self-taught weaver, spinner and dyer. Awarded a teaching diploma in piano from the Royal Academy of Music in 1899, she initially worked as a governess in London and Bonn from 1899-1902.

Mairet’s original interest was in geology, which is how she met her husband Ananda Kentish Commaraswamy, whom she married in 1902 and travelled with to Ceylon where they lived until 1906, teaching embroidery and writing articles on traditional Ceylonese crafts. In 1907, she returned to England, settling in the town of Broad Camden, Gloucestershire, in 1907. After the break-up of her marriage to Commaraswamy, she married Philip Mairet in 1913 and set up a weaving business in Stratford Upon Avon. Although very much rooted in crafts, she was pioneering in her exploration of new methods and techniques. In Hand-Weaving Notes for Teachers, she searches for ‘a new orientation of the crafts, a new idea of where they stand in relation to machinery‘ (Handweaving Notes for Teachers, 1949, p.34). In 1920-21, they moved to Gospels, to a house and workshop they had built in Ditchling, Sussex. She took on new apprentices here and exhibited internationally throughout the 1920s and 30s. After the break-up of her second marriage in 1931, Mairet continued to work and began teaching at Brighton College of Art, (1939-1947). Writing her obituary in the RSA Journal in December, 1952, Marianne Straub said, ‘She was active till the end, carrying on her weaving, taking pupils for short periods and sending to schools all over the country examples of her fine materials’. Mairet was a member of the Red Rose Guild of Craftsmen and the Guild of Spinners, Weavers and Dyers. She was the first woman to be awarded the RSA’s title of Royal Designer for Industry (RDI) in 1937.