During a recent visit, Professor of Visual Communication Paul Sermon gave a lecture at Lasalle College of Arts in Singapore and was interviewed on the subject of art therapy for Channel News Asia.

He also gave an in-depth interview, the transcript of which appears on Artitute.com.

Sermon is an interactive media artist whose work is based on live performance using digital technologies. He gave an exclusive interview, sharing some highlights of his career, from his Golden Nica award at the Prix Ars Electronica, to his interaction with Korean American artist Nam June Paik. He also shared his view on the future of virtual reality and talked about his teaching and creative practice.

Since the early 1990s, Sermon’s his practice-based research in the field of contemporary media art has explored the creative use of telecommunication technologies. Through his unique use of videoconference techniques in artistic telepresence applications he has developed a series of celebrated interactive telematic art installations that have received international acclaim. 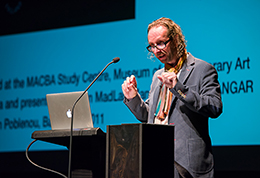