Climate change is the most pressing issue of our time, but is often the most difficult to communicate and to engage people with. Dr Julie Doyle is currently involved in a collaborative research project that seeks to address this problem by using creativity and play to explore young people’s perceptions of climate change.

As a recipient of a CUPP Seed Fund Award, Doyle, along with media colleague Helen Kennedy, is work- ing with ONCA Centre for Arts and Ecology and Dorothy Stringer High School on a project titled FutureCoast Youth: Creative Collaboration for a Changing Climate. The project aims to empower young people – the generation who will be most affected by climate change, but who are often given the least voice – to imagine and explore their responses to climate change, through participatory storytelling, play and performance.

FutureCoast Youth extends the FutureCoast storytelling project developed by US games designer, Ken Eklund, in collaboration with the PoLAR Institute at Columbia University: an international online digital storytelling project which asks audiences to imagine and create voice- mails from a range of possible climatically changed futures. FutureCoast Youth builds on this participatory imaginative premise to bring climate change to young people in Brighton. Through a series of workshops that use play, storytelling, ideas of time and of how to relate climate change to the everyday, Doyle and ONCA (led by its Creative Director, Persephone Pearl) are working with Dorothy Stringer’s Environmental Science GCSE students to explore their responses to climate change.

As members of the FutureCoast Youth team, the Dorothy Stringer Environmental Science students were introduced to the project through a participatory and immersive play event at ONCA Centre for Arts and

Ecology in September 2015. Doyle, along with Persephone Pearl and Jack Darach (independent arts facilitator), played in character as members of the fictional FutureCoast team, representing an interna- tional network of grassroots organisations addressing climate change through positive action and personal agency. Through interactive play, which included dissenting voices and humour, the students were able to engage with the issue of climate change in a playful way and go on to create their own voicemails from the future.

Subsequent workshops at Dorothy Stringer School (aided by Keith Ellis, independent arts facilitator) have used elements of play to help students become more confident and to enable them to explore and develop their own creative research projects related to climate change. With topics ranging from renewable energy and geo-engineering, to food miles and species extinction, students are currently preparing to present their creative projects in role as members of the FutureCoast Youth Climate Delegation at ONCA on 30 November 2015, to coincide with the opening of the UN Climate Conference, COP21 in Paris. Educational resources from the project are being shared via the project website, and further funding is being sought to expand the project beyond Brighton.

Doyle’s involvement with FutureCoast Youth is part of her wider on- going research into climate change communication and engagement. Author of Mediating Climate Change (2011), the first monograph to explore climate change from a visual culture and communication perspective, Doyle has previously worked with the artist David Harradine on a Leverhulme Trust Funded Artist in Residence project that sought to create new visualisations of climate change, culminating in the film, It’s the Skin You’re Living In (2012). Most recently, at the invitation of Intergovernmental Panel of Climate Change (IPCC) contributing author, Dr Carlos Gay Garcia, Doyle gave a keynote on ‘Climate change imagery and science communication’, at the Fifth National Conference on Climate Change Research, National Autonomous University of Mexico, Mexico City. 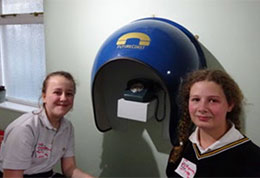