The meanings and reception of a new French memorial site

The opening of the Mémorial de Camp de Rivesaltes commemorated the tens of thousands of people who were interned at Rivesaltes in the Languedoc Rousillion region over the course of the twentieth century.

From the early 1930s, the memorial project follows Europe’s century of war, each new conflict leading thousands more to seek shelter in France, each new influx of refugees reinforcing decades of French indifference. Spanish Republicans, Jews, Gypsies and Harkis (Algerians who joined the French army as auxiliary troops during the Algerian War), all passed through Rivesaltes, living in desperate conditions due to their status as ‘undesirables’.

The memorial project is the subject of study for PhD candidate Ian Cantoni in the School of Humanities. Cantoni’s research addresses three diachronic moments in the Memorial’s history – the events that the Rivesaltes Memorial Museum witnessed and commemorates, the context within which the museum was conceived and created and the reception of the museum as an operational entity. A two-week research trip allowed Cantoni to attend the opening of the museum and begin ethnographic fieldwork onsite, studying the reactions of first-time visitors to the site. The visit also allowed him to take part in a major artistic project in collaboration with the Memorial: ‘Lettres de Rivesaltes’, designed to encourage cross-cultural communication. The project sees a series of works that visitors are encouraged to send to their home addresses, spreading those memories that Rivesaltes encapsulates and domesticating the memory work that the site demands.

The memorial, designed by Rudy Ricciotti, lies submerged in Block F, the same block that, in 1942, saw over 2,000 people deported to their deaths at Auschwitz. Five of the deportees were born in the Polish town of Oświęcim; returning to Poland in cattle trucks, they were to die in the town of their birth, its Germanic name: Auschwitz.

Rivesaltes is a unique site in the French memorial landscape, bringing together multiple historical traumas that have enduring legacies for the French psyche. For many years the Second World War held a unique place in collective memory, dominating popular and academic debate, whilst today, the aftershocks of the conflict in Algeria continue to resonate.

With recent events in Paris drawing attention to France’s domestic and international status and catalysing debates around migration and national identity, Rivesaltes’ memorial imperative becomes more and more pressing. As a communiqué from the Memorial team in the aftermath of the November terrorist attacks stated: ‘With our mission to address ourselves to everyone, particularly future generations, these events reinforce the necessity of educating everyone in the values of humanity.’ 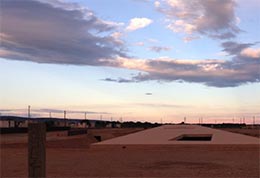