Histories of the Future: Crafting Alternatives

The Kindred of the Kibbo Kift, founded after the First World War offered a pacifist, all-ages and co-educational alternative to the Scout movement, aimed to reform all aspects of cultural and social life. Despite attracting the attention and support of a range of high-profile figures in the 1920s, from DH Lawrence to HG Wells, the vision and achievements of Kibbo Kift remain surprisingly little-known. A new book and exhibition by Dr Annebella Pollen seeks to address this.

Principal Lecturer in the History of the Art and Design, Pollen undertook an AHRC Fellowship to research a number of woodcraft groups. The movements drew thousands of members in the interwar years including artists and writers, spiritual seekers and political campaigners, pacifists and former suffragettes. They experimented with radical new approaches to education, economics, design and dress. Although their ideas are nearly a hundred years old, many woodcraft ambitions continue to resonate in the present day and can be felt in continuing youth movements, green politics, anti-capitalist campaigns and the return to craft.

Intellectual Barbarians: The Kibbo Kift Kindred, co-curated with Nayia Yiakoumaki of Whitechapel Gallery, showcases the cultural production of the most aesthetically ambitious of all woodcraft groups. Kibbo Kift was led by commercial artist, John Hargrave, and attracted a wide range of creative practitioners. Together they developed a distinctive theory and practice of outdoor living, mystical religion and utopian politics. With over a hundred exhibits sourced from public and private collections, the display revisits and reinterprets the group’s major educational exhibition at Whitechapel Gallery in 1929 and includes examples of the group’s original costume, craft and campaign materials. These reveal the group’s varied inspirations, from the folk revival to futurist advertising. Staged in the Archive Gallery, the exhibition also includes contextual correspondence, organisational ephemera and moving image footage. It runs until March 2016 and is accompanied by a curator tour, a late night social event and a study day, Art, Politics and Magic, which examines Kibbo Kift’s original social and cultural context and their twenty- first century legacies.

Pollen’s accompanying book is based on several years of detailed archival research and offers the first full-length account of Kibbo Kift’s artistic production and occult beliefs. Published by Donlon Books to an innovative design by Roland Brauchli, it includes over a hundred images and specially commissioned artefact photography including previously unpublished work by celebrated theatrical photographer Angus McBean. McBean first developed his skills as a photographer, performer, stage designer, mask maker and puppeteer while he was a Kibbo Kift member. A generous grant to support the book’s production was awarded by Lee Miller and Roland Penrose’s Elephant Trust, which supports art projects ‘that depart from the routine and signal new, distinct and imaginative sets of possibilities.’ The Kindred of the Kibbo Kift: Intellectual Barbarians has been the subject of a recent feature article in The Guardian. Cultural historian Jon Savage described the book as ‘a revelation’, stating, ‘it reconstructs a radical moment lost to history, a future that never happened.’

Book: The Kindred of the Kibbo Kift: Intellectual Barbarians. 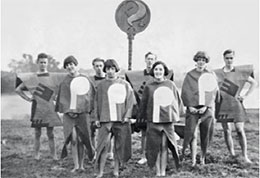