From Streets to Playgrounds in Toronto: Julia Winckler co-curates.

University of Brighton photographer and researcher Julia Winckler has co-curated an exhibition entitled From Streets to Playgrounds: Representing Children in Early 20th Century Toronto at the City of Toronto Archives. The initiative is part of a three year social sciences and humanities research initiative with five colleagues from the Universities of Toronto and Ryerson in Canada.

The exhibition features archival photographs, video and artefacts which paint a vivid picture of the lives of children in Toronto neighbourhoods such as 'The Ward'. It is a collaboration between artists and academics to explore relationships between media and social activism in early 20th century Toronto. The interdisciplinary team is making a unique contribution to the ongoing dialogue about Toronto’s early social history.

The team members focus on a critical period when children’s well-being – particularly in the city’s poorest quarters such as 'The Ward' - became the object of the city’s most prominent social activists and institutions. Well-versed in the use of the 'new media' of their time – photography – activists such as J. J. Kelso made a case through the shrewd use of images for moving children from the streets to structured, supervised and purportedly safer playgrounds.

The exhibition, containing photographs and video, mines numerous Toronto-based archives to bring forward rarely-seen images from the city's history and includes references to precedents for the depiction of street children that influenced significant Toronto photographers such as Arthur Goss and William James. It includes an original oil painting of a 'newsie' (a child newspaper vendor) that has been hanging on the walls of Toronto’s Granite Club for over a hundred years. As well, two key images by Goss have been transformed into animated videos that foreground the texture of everyday life in 'The Ward' of 1912-13. Additional video content connects Toronto’s focus on children to similar British initiatives. Also included are contemporary images meant to raise questions about how our current attitudes towards children and their independence may have changed in the ensuing 100 years.

The research and production of the exhibition has been supported by a grant from SSHRC (Social Sciences and Humanities Research Council) and exhibition production assistance from the City of Toronto Archives. 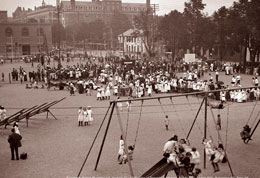