Community events and research project to commemorate the centenary of World War One.

Working in a consortium with the universities of Kent, Greenwich and Portsmouth, Brighton will help run one of five national Engagement Centres, funded by the Arts and Humanities Research Council (AHRC) in conjunction with the Heritage Lottery Fund (HLF). Known as Gateways to the First World War, the centre, funded to the tune of £500,000 over three years, will connect academic and public histories of WW1 for the commemoration which begins this year.

The Gateways centre, based at the University of Kent, will be co-run by the University of Brighton Faculty of Arts' Dr Lucy Noakes, Humanities Lecturer and an expert on women and war. In June last year a call was issued by the AHRC for proposals from consortia of research organisations to support and encourage interest in exploring WW1 and its legacy among communities across the UK. She said: "The centre will provide wide support for community groups funded by a range of HLF programmes, particularly through its new £6m 'First World War: Then and Now' community grants scheme. "All five centres form part of the First World War Centenary Partnership, led by the Imperial War Museums, and will complement other AHRC activities, including the BBC's World War One at Home project." 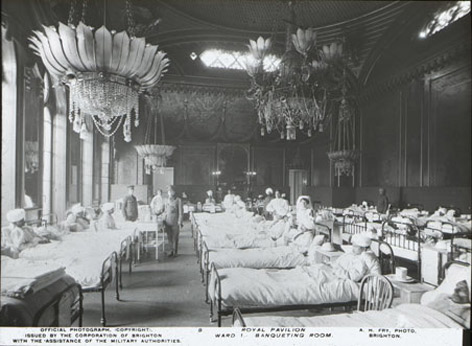 Working in partnership with a range of existing organisations, including Brighton Pavilion and Museums, Brighton Black History, Chatham Dockyards, the National Maritime Museum, Mass Observation and the Flanders Fields Museum in Belgium, Dr Noakes said the centre will support public engagement with the war, an historical event that played a fundamental role in the shaping the contemporary world.

She said: "In addition to working with community and heritage groups on histories, representations and commemorations of the war, it will provide research training, advice on sources and archival work, and opportunities for reflection on what it means to commemorate the centenary of the First World War."

Initial projects the centre is involved in include Healing War Through Art, an exhibition and seminar at the University of Brighton on the rehabilitation of wounded soldiers in the city, local histories of the First World War for schoolchildren, and a project to link schools in Kent and Flanders through commemorative projects.

Dr Noakes said: "We are very excited to have been selected for this project and to have the opportunity to collaborate with colleagues to work with community groups to help them share their WW1 history projects.

"The First World War was a conflict that continues to grip the imagination of generation after generation and its centenary provides a major opportunity for historians to reflect on its impact in a way that engages the public.

"Even today, 100 years on, we are learning more about the conflict and about the individuals who were involved, the casualties and the survivors, and those who suffered at home."

The UK centres will extend links with the programmes of community activities prior to a formal launch later this year.