Researching the myth of Sisyphus

The mythological tale of Sisyphus, a founding king of Cornith who was condemned by Zeus to eternally push a boulder up a hill without ever reaching the top, is the focus of PhD research by Louisa Buck.

Based on ideas of psychogeography - the concept that certain places evoke certain narratives, Buck travelled to Corinth in Greece to explore and develop the notion that the stories of Sisyphus were born out of the location in which they were set. Situated next to the Acrocorinth Mountain and referred to ten years later in the tales of the Odyssey, the site still harbours the spring mentioned by Apollodorus (300-260BC) that relates to one of many actions by which Sisyphus incurred the anger of Zeus. Sisyphus made a deal with the river god to redirect this spring to Corinth and in return he told him that Zeus had abducted his daughter. Most importantly, is the idea that Corinth represented to Sisyphus his dreams and appreciation of the power he enjoyed as king of the region, and helps to explain his desire for eternal life, which ironically was fulfilled; his punishment was eternal, ergo Sisyphus gained immortality.

Buck spent time producing a ‘mock up’ of an illustrated journal, a device constructed to demonstrate the ‘Classical Reception of the Myth of Sisyphus’, a case study titled: Why do British political cartoonists use images of Greek mythology? The case study is a record of Sisyphus’ story as written by others, and the different interpretations of his story. The relevancy of compiling a visual diary was born out the idea that notions of reception come out of Freud’s theories of psychoanalysis, a peeling back of layers to reveal core truths. Visual diaries are a common devise often employed by both artist and those undergoing therapy as a tool to record and explore complex processes and to unpack thoughts, ideas and emotions.

Buck was able to visit, draw and photograph parts of the site that are mentioned in Sisyphus’ mythological history, and she also climbed the mountain overlooking ancient Corinth that forms such a key factor in the outcome of Sisyphus’ actions in his lifetime. The drawings she made will be included in the illustrated classical reception journal.

Visiting these key sites in Greece brought alive the ancient stories and made them believable even within their modern contexts. Text from Pausanias’ Descriptions of Greece 2.5.1 (second century BC) where he describes Sisyphus’ pact to have the spring of the Peirene redirected to Acrocorinth, (also Diodorus Siculus 4.72.5, Pindar’s Olympian Odes 01.13.60-86 and Strabo’s Geography 8.6.21 (first century BC), all describe places that still exist and are important elements of Sisyphus’ history.

Drawings, photographs and written works were produced as an outcome of this trip: a collection of primary source material, reflecting the old and new aspects of the myth, what it represented at the time of its conception, and what it has come to represent, supporting the hypothesis that mythology contains truisms on the human condition that transcend time.

This research activity has contributed to the originality and scope of Buck’s research, as no images of Sisyphus have been produced that directly connect the landscape which inspired the myth. 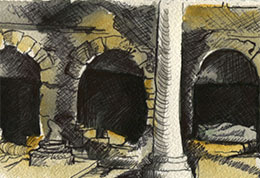