Spaces of violence and resistance

September is known unofficially as ‘memory month’ in Chile, a time when cultural memories of the military coup (11 September 1973) intersect with patriotic discourse celebrating independence from Spain. This provides a rich moment at which to observe nation building practices, while unpicking the ambivalent relationship Chileans maintain with the country’s recent dictatorial past.

While military repression largely came to an end with the restoration of partial democracy in 1990, the spectral presence of the dictatorship nonetheless continues to exert influence on Chilean society, from the psychological trauma resulting from practices of torture and disappearance, to social inequality perpetuated by neoliberal economic reforms. How to interrogate these lingering inheritances, without petrifying historical narratives, or plunging into a cycle of traumatic repetition, is the problem at the heart of Struan Gray’s research.

Gray is a second year PhD candidate who recently returned from a month long research trip to Chile. His work analyses how cultural memories of state repression are constructed and contested in film, focusing specifically on the representation of places of past violence in post-dictatorship Chile.

Following film and cultural geography scholars such as Karen Till and Giuliana Bruno, his work focuses specifically on the imaginative geographies of past violence, analysing how sites of torture, conflict and burial are reclaimed and contested through physical memorials and filmic representation. Academic interest in the spatiality of violence in Latin America has intensified in recent years, including cartographies of memorialisation in Santiago and ethnographies of former torture centres. What these pieces often lack is a sustained interrogation of the role of art as a force in the contestation of site- specific memories. Gray’s hypothesis posits that filmic representation offers alternate cartographies of pain, violence and injustice for unsettling locations that no longer bear the traces of violence, thus re-imagining memorials at which historical narratives have become reified.

Gray’s research trip was composed of numerous visits to former torture and detention centres throughout Chile, coupled with regular trips to the film archive at the Museum of Memory and Human Rights in Santiago. His analysis focused specifically on the significance of these sites within the wider debates about cultural memory and representation. How, for example, are issues of pain and absence approached in site-specific memorials? To what extent are the structures and spaces imbricated in processes of closure and amnesia? And how are they linked to broader struggles for social and criminal justice in contemporary Chile? The combination of film analysis and on-site observation offers a broad discursive perspective of ‘place making’ processes, illuminating the spectral stories and images that circulate urban and rural landscapes and disrupt normalised conceptions of time and place.

It is too early for concrete conclusions; however, his preliminary observations suggested that site-specific memorials often have an allochronic function. Museums and monuments consistently condemn violent repression, while simultaneously isolating the dictatorship’s effects to an initial moment of violence. They therefore fail to engage with the on-going social and psychic legacies of dictatorship rule and naturalise a chronological conception of time. By contrast, films such as Nostalgia for the Light (Guzmán, 2011) and Escapes de Gas (Salas, 2014) uncover the multiple histories of place in order to locate sites of violence within an on-going narrative of state and corporate repression. In saying this, Gray did not aim to celebrate the utopian potential of film, but highlight the complex role of visual discourse in shaping and contesting our experience of place; a role that, very occasionally, might ripple the amnesiac exterior of contemporary Chile. 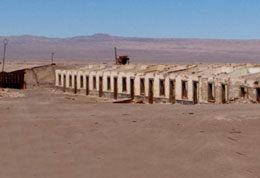