The Ambassador of Ireland in the United Kingdom, His Excellency Ambassador Dan Mulhall (pictured on the left), spoke at the launch of a new book co-edited by Professor Graham Dawson from the University of Brighton’s School of Humanities.

The book, titled The Northern Ireland Troubles in Britain: Impacts, Engagements, Legacies and Memories, was launched at the University of Notre Dame (London campus) on 26 January 2017.

This ground-breaking book provides the first comprehensive investigation of the history and memory of the Northern Ireland Troubles in Britain. It examines the impacts of the conflict upon individual lives, political and social relationships, communities and culture in Britain, and explores how the people of Britain (including its Irish communities) have responded to, and engaged with the conflict, in the context of contested political narratives produced by the State and its opponents.

The book is organised in four thematic sections: perspectives of the British State; anti-state activisms; culture and representation of the Troubles; and memory, peace-building and ‘dealing with the past’. Its 24 chapters include essays, memoirs and testimonies of personal experience. Contributors include activists, victims/survivors, and scholars from diverse personal, political, and academic backgrounds, to create a multi-faceted and interdisciplinary conversation about the conflict.

The book aims to demonstrate that 'unfinished business' from the conflict persists unaddressed in Britain. It advocates the importance of acknowledging legacies, understanding histories and engaging with memories in the context of peace-building and reconciliation. By challenging the lack of serious public engagement in Britain with the peace process, and the widespread sense among people in Britain that ‘the Troubles are nothing to do with us and are better left alone’, it hopes to encourage further research and public debate.

At the launch, the book’s editors (from right to left) Professor Graham Dawson from the University of Brighton, Dr Stephen Hopkins from the University of Leicester, and Jo Dover who worked for fourteen years at the Tim Parry Johnathan Ball Foundation for Peace in Warrington, spoke about how the seeds of the book were sown when they met at a conference on Ireland and victimhood in France in 2010. Discovering that they shared concerns about the lack of information or interest in the effects of the Troubles in Great Britain, they organized a three-day conference in 2012, which laid the ground for the book. The editors also spoke about predominant attitudes towards Ireland and the Irish amongst the political class in Britain during the Troubles, and the anxiety, criticism, and resistance that the conflict created here. Describing Great Britain as a post-conflict society that does not recognize itself as such, they suggested that denial of conflict in Britain silences those affected. These include the families of personnel who were killed in Northern Ireland, injured soldiers, Britain’s Irish communities, victims of the Republican bombing campaign in England, and pro-Republican or human-rights activists challenging the State.

Ambassador Mulhall (pictured far left) spoke about the changes in the relationship between the governments of the UK and the Republic of Ireland, and changing attitudes to the North, that he has witnessed during his diplomatic career since the dark days of the 1970s. As a member of the delegation from the Irish Republic he had participated in the achievement of the Good Friday Agreement, and he urged those attending the launch to keep in mind the bond and common purpose between the two countries that has been forged at the highest levels of government and the State and has sustained the peace in Northern Ireland. Symbolised by the respectful and inclusive centenary commemorations of the Battle of the Somme and the Easter Rising in 2016, it has also brought about lasting changes in the relationships between North and South, unionist and nationalist in Ireland. It would, suggested Ambassador Mulhall, enable the current challenges posed by Brexit and the suspension of the Northern Ireland institutions to be surmounted.

90 people attended the launch, including 15 of the contributors, several of whom are members of the Irish community in Britain. Laura O’Reilly, from the third generation of an Irish family in Birmingham, attended with her mother and her father, Barry, whom she had interviewed for the book together with her grandparents and aunts about their memories of being members of a ‘suspect community’ after the pub bombings of 1974. Maude Casey, Brighton-based author of a novel Over the Water published in 1987, reflects on how the book came to be written in response to anti-Irish racism of the time, and the assertion of Irish culture and identity that challenged this. Tony Murray writes about William Trevor’s short stories depicting relationships between Irish and British people in London during the Troubles. Other Irish contributors write about their interviews with leading British politicians, the experience of being a Sinn Féin activist in London, policing the Irish community during the Troubles, and the campaigns and debates about women in the Irish conflict undertaken by feminist groups in Britain.

The book was also given a Northern Ireland launch on 19 January hosted by INCORE (the International Conflict Research Institute) at Ulster University in Belfast. Welcoming the book as challenging, compelling and filling a vacuum in academic engagement with the Troubles, INCORE’s Director, Dr Maire Braniff, suggested that its approach offered the humanities and social sciences ‘a vision of how research should be conducted’. 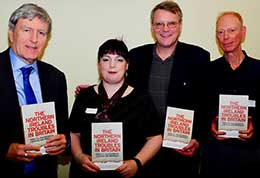