Dr Ewan Kirkland's research explores how it reflects the contradictions and complexities of modern life.

A newbook by media researcher Dr Ewan Kirkland at the University of Brighton explores how children’s films and games designed by adults can be seen as a means of negotiating the contradictions and complexities of the modern condition.

Representing a development of Kirkland’s PhD thesis on children’s cinema, the study explores film, television and digital games made for child audiences. Contemporary conceptions of childhood predominantly emerged in the modern period, where children became increasingly separated from adults, and were largely insulated from the impacts of urbanity, industrialisation, knowledge, capitalism, consumerism and citizenship. This results in children’s recurring association with nature, the countryside, innocence, and earlier forms of culture and society. At the same time, many institutions of childhood are designed to enculture children into modern living, while alternative discourses define children as the very embodiment of enterprise, technology and the future. Popular media aimed at children is of course itself a product of modern processes, and Kirkland’s book examines the tensions and ambivalences such texts reflect about childhood and modernity.

Children’s culture as a symbolic retreat from modern life is reflected in the Narnia or Harry Potter series. Both narrate twentieth century children who escape into a world of medieval castles, unspoilt countryside, magic and mythical creatures, where all traces of contemporary living are absent. The recurring influence of fairy tales, medievalism and talking animals associates children and children’s culture with pre-modern cultures. At the same time, these films often employ sophisticated imaging technologies in their depiction of stories which might be centuries old. Recent Disney adaptations of Rapunzel and The Snow Queen use spectacular computer imaging, while the pleasures of recent remakes of Cinderella and Beauty and the Beast rely on the photorealistic combination of live action and digital animation. The juxtaposition of the ancient and the contemporary in children’s media represents one of the many contradictions this study explores.

The book is organised around a series of case studies. The Wallace and Gromit franchise is one of many organised around inventors, and represents a self-reflexive acknowledgement of the technology entailed in moving image entertainment. This is rendered child-like through the conspicuous technique of stop frame animation, the employment of modelling clay, and the depiction of elaborate machinery composed from everyday household objects.

The Teletubbies series is examined as a show which redefines the delights of television as somehow magical, extra-terrestrial, supernatural. The show’s eponymous characters are cyborgs with screens embedded in their bellies, inhabiting a world which is part Eden-like garden part science fiction bunker populated by anthropomorphised domestic machinery. The study also explores the digital games contained on the CBeebies website, Sony’s Little Big Planet and the Disney Infinity series as reflecting the tradition of interactivity in children’s television, themes of colonialism and imperialism in children’s fiction, and connections between children’s screen entertainment and material culture.

The study constitutes a history of children’s relationship with screen media, from the projected screen to the electronic screen to the digital screen, illustrating the longevity of many tropes and traditions back to early print media for children. The book illustrates the extent to which children, childhood and media for children have repeatedly negotiated young people’s complex relation with modernity. It also suggests the many functions media for children serve in reconciling adults to the tension of modern life. 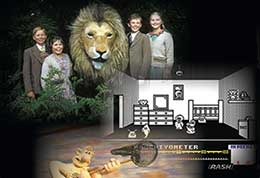