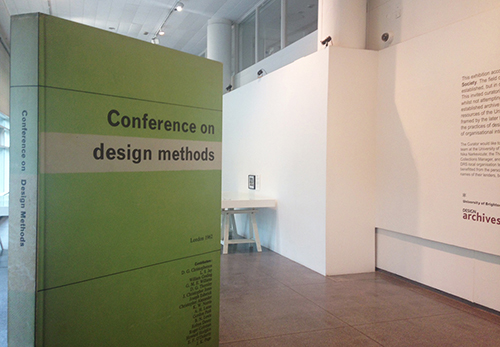 The field of scholarly activity associated with design research is now well established, but in contrast, studies of the Design Research Society’s own trajectories are still in their infancy. The invited curatorial intervention, Design Research & Its Participants, represented one approach to these emergent enquiries, whilst not attempting a straightforward re-telling of the Society’s history. The exhibition accompanied and extended beyond the fiftieth anniversary conference of the Society, which was held in Brighton in June 2016. The displays examined the inter-play of a coterie of individuals associated with a range of design organisations active in the later twentieth century, as a means of locating the work of the Society, which lacks its own formal archive.

Tasked with celebrating and critiquing half a century of achievements in the absence of such a resource, Whitworth uncovered a surprising amount of organisational inter-dependence through the process of local archival excavation. The period witnessed a flowering of formal groupings of those actively interrogating the practices of design, many of whose activities are represented in the University’s Design Archives. The displays resulting from this research were therefore conceptualised to make extensive use of these holdings, as well as loans from the Graphic Design Archive and L Bruce Archer Archive of the Royal College of Art Special Collections, and the Special Collections of the St Peters House Library, University of Brighton. The final element, including audio material, was supplied by loans from members of the Society themselves, through the intervention of research associate Darren Umney.

‘Design Research & Its Participants’ brought together photography, posters, albums, correspondence and myriad other forms of visual and text-based document  from the archives of the Design Council, ICSID, Icograda, Anthony Froshaug, WH Mayall and FHK Henrion, to evidence the ferment and frustration of early DRS activity.