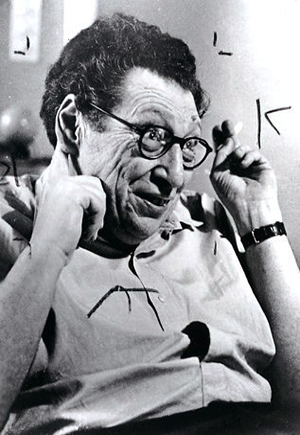 Born Jerzy Himmelfarb in Lodz, Poland (then Russia) on 4th August 1900 Him shortened and anglicized his name in 1933. Educated in Warsaw he went to Moscow in 1917 to study Roman Law but when the university closed during the Russian revolution, he went to the University of Bonn and completed a PhD on the comparative history of religion in 1924. Him wanted to pursue a more creative career path and registered at the Leipzig Academy for Graphic Art (1924-8), and received his first design commission in 1926, before formally starting work as a graphic designer in Poland and Germany. He helped to establish the KAGR (the Circle of Advertising Graphic Artists) and formed a partnership with the artist Jan Hewitt in 1933.

The two men decided to relocate to England after Lund Humphries held an exhibition, and the Victoria & Albert Museum (V&A) asked for samples of their work. Lewitt-Him set up in London in 1937. During the Second World War their posters for the Ministries of Information, Food, and War became familiar images, particularly ‘Shanks Pony’ and ‘The Vegetabull’. They also painted murals for factory kitchens and canteens. The Polish government in exile benefitted from their design skills.

Naturalised British in 1948 Him’s designs ranged from posters to book jackets, from toys to exhibition stands and his client list was equally wide ranging, including Imperial Airways, Pan-American Airways, American Overseas Airlines, Horizon Holidays, RoSPA, Formica, Penguin Books, Punch, Australia House, Phillips and jam manufacturers Chivers and Hartleys. In the 1950s Him created the imaginary county of ‘Schweppeshire’ as part of an advertising campaign for the soft-drink manufacturer.

As well as the large umbrella tree for the ‘Wet Weather Section’ of the Britain Can Make It exhibition (1946) Lewitt-Him designed the 25ft high Guinness clock for the Pleasure Gardens at Battersea Park, and murals for the Education Pavilion at the Festival of Britain (1951). Following Sir Gerald Barry’s talk at the RSA in 1961 on ‘The influence of the Festival in Britain on Design Today’, Him told the audience ‘that the most important thing about the Festival was the spirit of excitement…both among the public and the creative people’.

By 1955 the partnership had dissolved as Jan Lewitt returned to painting while Him continued to work on his own as a graphic designer. He received commissions for a window display for the official opening of De Bijenkorf department store in Rotterdam (1957); a ‘Noah’s Ark’ display of Australian products for the Ideal Home exhibition (1960) and a Christmas themed window for the Design Centre, Haymarket (1961), as well as illustrations for books, including those he wrote for children. These included Frank Hermann, Giant Alexander series, Don Quixote, King Midas, Zuleika Dobson and Two Plays for Puritans by George Bernard Shaw. He produced the graphics for Kipling’s Just So stories for Thames Television and in 1977 he designed the posters and logo for National Children’s Book Week and received a prize under the V&A Frances Williams Book Illustration Award scheme.

Him undertook a variety of projects connected with Israel and Jewish culture. He designed the Warsaw Ghetto exhibition that was shown twice in London and later in Frankfurt, and also conceived and designed the Masada Exhibition shown at the Festival Hall in 1966. This exhibition later toured the United States, France, Germany, Holland, Belgium, Sweden and Switzerland before being presented at the Israel Museum in Jerusalem. As well as producing the graphics for the Halas and Batchelor animated film ‘For Better, For Worse’, Him designed the lettering for the Israel Pavilion for the Brussels Expo (1958), and nine years later he was appointed chief designer for the Israel Pavilion for the Montreal Expo. El Al Airlines appointed Him their Chief Designer in 1960 and he created covers for the Middle East magazine.

Him, one of the first members (with RDIs Tom Eckersley, Barnett Freedman, Ashley Havinden, FHK Henrion, Walter Herdeg and Hans Schleger) of the Alliance Graphique Internationale (AGI) established in 1952, said, at their 1960 meeting, that the creative process, as he saw it, was ‘a fragile thing, born out of soul-searching and grappling in the dark’. Looking back on his career Him said ‘I am roughly as old as graphic design in the modern sense and have watched its development, for better or worse, into a proper profession’.

A Fellow of the Society of Industrial Artists and of the Society of Typographical Designers, Him accepted the position of Senior Lecturer in Design at Leicester Polytechnic in 1969. Seven years later, at the invitation of Tom Eckersley RDI, a retrospective exhibition of Him’s work was held at the London College of Printing and, Him reciprocated by writing the introduction to the catalogue for the exhibition of Eckersley’s designs held at the Camden Arts Centre in 1980.

Artist and illustrator David Gentleman RDI wrote an obituary for Him, who had been appointed a Royal Designer for Industry (RDI) in 1977, for the Journal of the Royal Society of Arts. In it he described Him’s work as ‘always adventurous, humorous and elegant; but it also had a simple and unassuming, almost childlike air’ that 'seemed to belie his breadth of vision and understanding'.

Him was still eagerly drawing at the end of his life and he died in London on 4th April 1982 at the age of 81.

Him is featured in the Britain Can Make it Exhibition catalogue (as Lewitt & Him) as follows:
To view and search the catalogue online, please visit our digital document library.

To learn more about the work of George Him, his relationships with other designers, and further resources, visit the Exploring British Design prototype web portal.