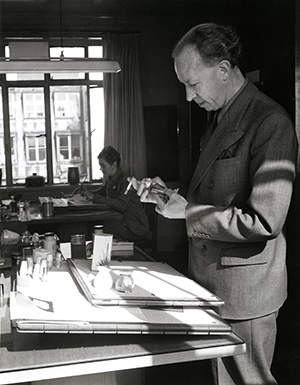 Capey worked as a junior designer for Doulton pottery while attending the School of Art in his home town of Burslem as a day release student. He then studied at the Royal College of Art from 1919 to 1922 as well as exploring design in France, Italy and Sweden. In 1924 he joined A.B. Read on a tour of the south of England visiting craftsmen working in wood and iron for the newly formed Rural Industries Bureau before taking on the role of Chief Instructor of Design at the RCA from 1925 to 1935. He was appointed Chief Examiner in Industrial Design for the Board of Education, 1937 to 1940.

Although he produced designs for pottery, glass, metal, textiles and lacquer Capey is best known for his work as the Art Director of the British cosmetics firm Yardley of London, where he worked from 1928 until his retirement in 1959. He was responsible for the elegantly designed cosmetic containers with their flower and honeybee motifs, as well as the firm’s advertising artwork, store fittings and fixtures.

In 1934 Capey was elected a Fellow of the Royal Society of Arts (RSA) and appointed a Royal Designer for Industry four years later. He took an active role in the 1935 British Art in Industry exhibition, organized jointly by the RSA and the Royal Academy. As well as serving on the advisory panel Capey designed the neon sign for the RA portico, as well as the stair rods, banisters, turnstiles, counters, floor gratings and a number of display windows in a manner suggesting small shops in an arcade. Some of his ceramic designs were among the exhibits. A plastic lipstick container for Yardley was Capey’s contribution to the RSA's Design at Work 1948 exhibition.

Capey made an extensive study of Chinese lacquer and developed a passion for the exciting possibilities of designing and printing textiles.  He wrote on both these subjects: Lacquer (1928) and The Printing of Textiles (1930). In 1940, two years after his appointment as an RDI, Capey gave a lecture at the RSA on ‘Design in Daily Life’, in which he stated that ‘the proudest title in the world of art is “designer”’.

Capey is featured in the Britain Can Make it Exhibition catalogue as follows: