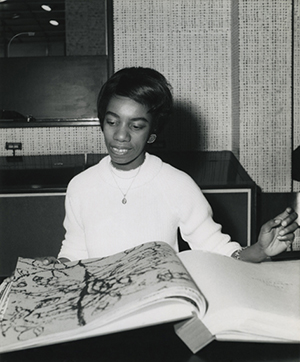 Born in Port of Spain, Trinidad and Tobago.

Althea McNish moved to London in the early 1950s and studied at the London College of Printing and then the RCA. She graduated in 1957 and was immediately commissioned by Liberty (link to VADS) Cebollas (1958) and Hibiscus (1958). In 1961, she designed furnishing fabric for Hull Traders and Cavendish Textiles. Since 1971, she has worked in partnership with her husband and designer John Weiss, on interior design, silverware and textiles projects. In 1979 she painted velvet fabric hangings for the boardroom of the British Railways Board. In this portrait, she is pictured looking at a Wallpaper Manufacturers Ltd (WPM) book, open at her Crystalline design in the black and white colourway, which she designed for the company’s Palladio 4 range. In the 1980s, she designed for textiles companies in France, Germany, Italy and Slovenia and created a mural on the Nordic Empress Caribbean cruise line in 1989. McNish is a Fellow of the Chartered Society of Designers (CSD). For many years she was on the National Council and London Committee of the Design and Industries Association (DIA) as well as being on the board of the UK Design Council and the governing body of Portsmouth College of Art. In 2006, she was made an Honorary Doctor of Fine Art at the University of Trinidad and Tobago.