One branch of the project has been to evaluate the potential of the flax plant for biomedical use. Flax seeds (aka linseeds) when exposed to aqueous fluids have the fascinating property of exuding copious amounts of a gel-like mucilage, which is a heterogeneous mixture of polysaccharides and proteins, quite similar in nature to human mucosal secretions. Anecdotally, mucilage has traditionally been used as a demulcent to soothe inflamed membranes (e.g. sore throats), to which it forms a close physical association, known as mucoadhesion. Mucilage possesses a plethora of charged moieties within its structure which makes it a good candidate for loading with chemotherapeutic drugs (with opposing charge), which can be slowly released at an appropriate target site within the body. Dr Iain Allan of The University of Brighton School of Pharmacy and Biomolecular Sciences (PABS) has focused his research on the creation of mechanically stable mucilage hydrogels which can be loaded with actives (such as antimicrobial agents or anti-inflammatories). Such gels could be applied to the mucosa (e.g. oral, vaginal mucosa) to deliver a slow-release chemotherapeutic dose. This could provide direct therapy to damaged mucosa and also offers the capability to deliver drugs systemically by a means that by-passes the liver (which otherwise greatly reduces the drug concentration from the initial dosage).

Dr Allan has also created mechanically stable mucilage-containing gels in the form of cryogels. These are highly porous, interconnected structures with a sponge-like morphology that are formed by freezing of a pre-gel formulation. Mucilage cryogels have a number of potential applications. These cross-linked materials have good mechanical properties allowing their synthesis in the form of patch, that when applied topically, can closely follow the contours of the skin. Such patches can be infused with active drugs in a similar manner to the hydrogels described above. Their highly porous nature also provides an ideal environment for infiltration with human cells. Current work in PABS is evaluating their use as dermal tissue regeneration scaffolds for use in the treatment of burns victims and the reconstruction of skin damaged by chronic ulcers. 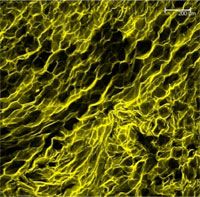 A confocal laser scanning microscopy image of a mucilage/gelatin cryogel. This sponge-like gel has a porous structure, with the pore walls here represented in yellow. The mucilage portion of the wall can bind antimicrobial agents which will be controllably released at the wound site. 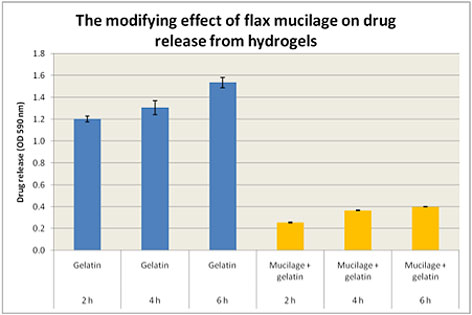 Chart: The release of a model drug from gels made of gelatin or mucilage/gelatin over a six hour period. The rate of drug release was reduced in the presence of mucilage, allowing for beneficial prolonged drug-release 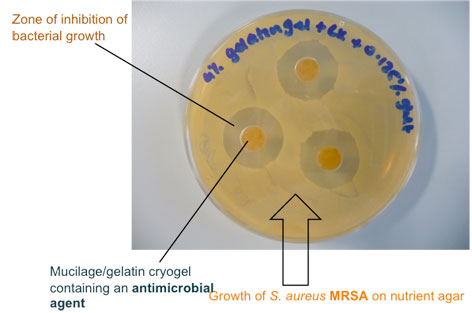 Image: A prototype mucilage/gelatin hydrogel patch. The durability of the gels can be enhanced by the addition of a cross-linking agent.

Dr Allan and Dr Lyuba Mikhalovska (also of PABS) have been researching the infusion of the fibres of the flax plant with antimicrobial agents for fabrication into wound dressings. These fibres have a porous structure, with properties superior to those of the current material of choice, cotton (e.g. stronger and more absorbent – as shown by in-house mechanical and biochemical tests). The antimicrobial agent chlorhexidine was added to flax fibres and allowed to penetrate into the pores. After thorough rinsing, the fibres were found to have been imbued with both bacteriostatic and bactericidal activity against Staphylococcus aureus MRSA and Pseudomonas aeruginosa, two key pathogens responsible for infections of hospitalised patients.