European wildlife is inextricably linked with agriculture, with 75% of animal and plant species associated with farmland. Conservation of this biodiversity is essential for maintaining ecosystem services eg pollination of food crops and soil integrity.

Land use in the UK and France is legislated by the Habitats Directive (1992). Therefore recent proposals to increase UK cultivation of flax to levels similar to those in Normandy, North-West France, must be accompanied by an Environmental Impact Assessment (EIA). Our study represents a preliminary EIA of vertebrate bio-indicators.

12 grid squares, each containing large flax fields, were surveyed on foot, one hour after sunrise, twice yearly.  Squares were spaced more than 4km apart to ensure spatial independence of the data. Individuals/breeding territories of brown hare and skylark were recorded. These species were chosen because they are declining across Europe.

Our data shows that there appears to be selection against flax by both species. Although crop type predicted occupancy, skylarks and hares were more likely to be recorded in other crops, eg sugar beet, than in flax. This may be related to the short growing season of flax (100 days).

The study is ongoing, hence further data may elucidate the findings. 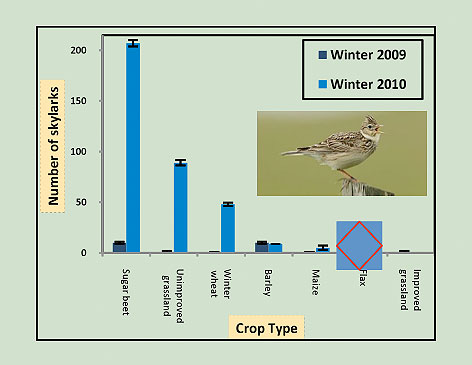 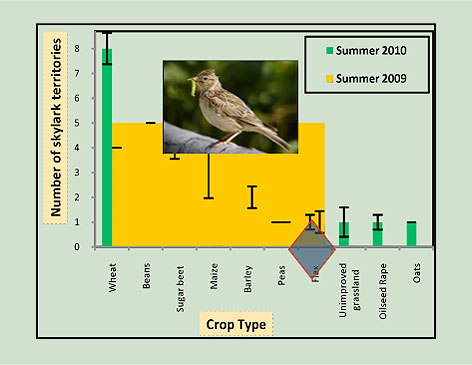 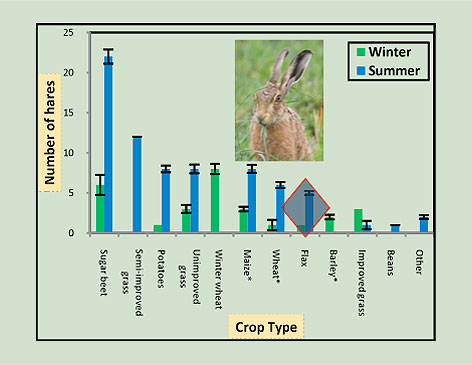