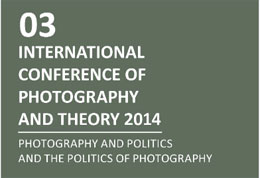 Ignacio Acosta. Copper Geography: Photography and the Politics of representation of the mining industries.

The end of the 20th century and the first years of the 21st century were characterized by a series of dramatic events that deeply affected social, cultural, political and economic structures across the board, both globally and locally. These events have prompted artists and theorists worldwide into a vehement engagement with political issues. Photography has historically played a key role in this political engagement, mainly through its evidential power: the camera becoming an influential recording tool and the photograph as a proof of truth telling. On the other hand, the veracity of an image and its authenticating attributes have been strongly contested, raising issues of ethics, manipulation and political steering. In parallel, the actual medium of photography has undergone fundamental changes specifically with regard to its production, distribution and consumption. The historical production of photography has been strongly challenged and even overly replaced by the emergence of what constitutes the contemporary digital culture, again bringing to the fore essential and often ethical issues related to the dissemination, reception and interpretation of an image.