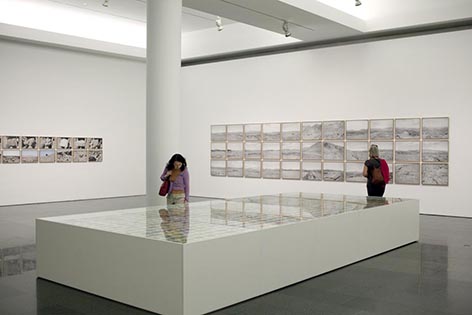 The Liverpool-based exhibition to follow the previous year's exhibition in Barcelona.

This exhibition investigates the potential of photography as a tool for re-reading recent history through themes that invite us to reflect on our immediate surroundings. Nitrate is the central axis of the exhibition in the Museum, which also includes projects carried out by Xavier Ribas in the last decade.

This exhibition by Xavier Ribas (Barcelona, 1960) to bring together a substantial body of work made by the photographer over the last decade. The exhibition takes its title from his latest investigative project into nitrate extraction. The system of colonial exploitation led by British companies in the Chilean Atacama Desert is a case study whose geographical and historical scope is held to question by Ribas’s photographic practice. This ambitious study, produced between 2009 and 2014, is presented here for the first time along with a selection of his earlier works. The first part of the exhibition – which prefaces the section dedicated specifically to Nitrate – includes four photographs from the Sanctuaryseries, 2002, and eight series from the most extensive group of works in the artist’s career, Concrete Geographies, 2002–9.

In the mid-1990s Xavier Ribas first became known with his project Sundays, 1994–97, an investigation of the outskirts of Barcelona. With this series, which initiated his anthropological perspective and earned him immediate recognition, he began his research on the relationship between the urban and the everyday. Ribas’s photographic practice, following the habits of those he pictured making spontaneous use of areas of wasteland, located itself on the margins of the transformations affecting Barcelona as a result of the 1992 Olympic Games, which turned the city into a standard bearer for the service sector economy.

The projects collected under the title Sanctuary, 1998–2002, continue the exploration of urban peripheries with works in which the author addresses the interstitial spaces of the city. These series present us with the subaltern practices freeing behaviour from interpretations that associate these places with the urban void, as in the four photographs showing places where prostitutes solicit for customers, taken near the borders of main roads. With Concrete Geographies, 2002–9, the anthropological view of the metropolitan space shifts closer to the approaches of archaeology. The concept of memory leads to a set of explorations around the marks left by institutional and private strategies on the territory. Ribas returns to the notion of the threshold previously raised in the various series of Sanctuary, but this time not so much in its spatial sense, but to address the temporal dimension of any place. This approaching of the past and future of places is materialised visually by using the grid format as a critical strategy for dealing with the processes of exclusion, exploitation and appropriation to which these sites have been subject.

With his work prior to 2009, Ribas earned a reputation as a photographer committed to the geographies of abandonment: areas to be found emerging on the outskirts, borders of all types and conditions, and points of temporary settlement where human presence is subject to the politics of expulsion. Over the years the career of this artist has evolved toward an increasingly austere and sober use of photography, evoking the prolonged influence of a contemporary landscape enthroned by the New Topographics. Although his style has changed relatively little over time, his practice has been able to accommodate the complexity arising from the knowledges, materials and languages that make of photography a support for the documentary dispositive. The fusion of historical, economic and political elements present in the landscape culminates in the last of his projects dedicated to revisiting the history of the exploitation of nitrate in Chile, an activity that reached its peak between 1870 and 1920.

Nitrate, 2009–14, is an essay in which we find the photographic image at the service of an interpretation of history emphasising its more materialist dimension. Throughout the different works that make up this section, issues such as colonialism, the circulation of profits or the current echo of past conflicts are addressed. For five years, Ribas has dedicated his photographic practice to investigating the natural history of this ore mined in the Atacama Desert. Saltpetre or nitrate of Chile is a sodium nitrate that, once processed, can be used as fertiliser or as ingredient for the manufacture of explosives. Its power as a substance and its value as a commodity lie in its ability to change from material to immaterial state, to transform and to be transformative. In this compound form, the element nitrogen – which comprises 80% of the earth’s atmosphere – can speed or shatter life.

Most of the Nitrate works integrate photographic with archival images, information, stories, news, inventories, lists and even objects, so that the documentary dispositive adopts any form except that of a photographic genre tending to consolidate its meaning. One of the functions of this documentary dispositive consists in returning to these representations of the past and exposing them to new meanings. The historical time contained in Nitrate exceeds the time of documentary observation, in the same way that the natural environment of nitrate, once extracted from the earth, becomes that of the circulation of capital. So, while previous series always represented locations that could be experienced empirically, with the artist being there in body and taking views in situ, the Nitrate works suggest a space that is boundless and links multiple locations. Unlike the series grouped under the headings of Sanctuary and Concrete Geographies, in which the constituent bodies of work maintain a clear autonomy with respect to each other, the works brought together in Nitrate transform this relationship into a complex essay.

The project that has finally taken shape as Nitrate arises from the photographic album Oficina Alianza and Port of Iquique 1899, and from the correspondence that has survived within its pages for more than a century. Ribas developed this research in collaboration with historian Louise Purbrick and photographer Ignacio Acosta at the University of Brighton, making this an artistic project with one foot in the museum and the other in the university department. The documentary dispositive of Nitrate articulates different approaches to research, both academic and artistic, and recalls to some extent the genre – typical of a tradition associated with institutional critique – that crystallised in the 1970s: a kind of composition that demanded the combination of data and photography, and whose results were in many ways akin to investigative journalism. Nitrate constitutes a case study re-examining in the present the extractionist policies practised over centuries, above all on the South American and African continents, and whose consequences in geopolitical, ecological and human terms have been so dire.