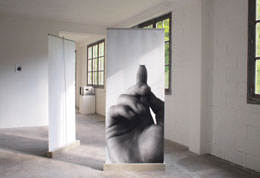 O Chair O Flesh is an exhibition that draws upon a number of references that relate to the surroundings of Treignac Projet; a former yarn factory situated on the Vézère river, France.

It was Georges Bataille, who in 1959, wrote about this river valley, as part of his research on the Lascaux caves. Describing it as he re-envisioned Paleolithic humankind moving through the valley, bringing with them the beginnings of representational, imagistic culture. Bataille referred to the Vézère valley as 'the cradle of humanity'; 'the place where intensified human life assumed a humane look in its own eyes and in the eyes of others that entered this pool of light'. Bataille's evocation goes far enough to suggest that all humanity could be tracked back here; to this cradle in the middle of France, referred more contemporaneously as 'the hole', due to its levels of unemployment, vacant industry, and low density of population. The cave paintings at Lascaux were, of course, images that did not impose a future beyond the killing rituals of the aurach necessary for Paleolithic man's immediate survival. They were images produced without historical destiny. And yet, something of their founding principle reverberates across the landscape, carried through the region's history of meat production over centuries of farming. There is a Limousin breed of cattle, belonging to the region in namesake and bred across the world; there is a plaque outside Treignac Projet that commemorates the birthplace of Ignace Dumergue, a local cattle herder killed on the barricades during the 1830 Revolution in Paris, over 400 kilometres away. In several examples particular to the region surrounding Treignac, relationships between animal and human have been protracted through the arbitrations of agricultural labours and technology, the food distribution network, and political history.

These references form the grazing plot upon which the exhibition O Chair O Flesh has developed. Through a range of artistic approaches and responses, the exhibition considers the human body and the redistribution of environmental relationships as a measure of cultivated life.