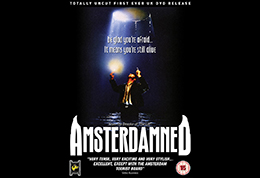 The University of Brighton, Grand Parade

Over the last nine years, the Cine-Excess International Film Conference and Festival has brought together leading scholars and critics with global cult filmmakers. Cine-Excess comprises of a three day conference alongside filmmaker interviews, UK theatrical premieres of up and coming cult releases as well as related film industry panels.

Cine-Excess IX is hosted by the School of Art, Design and Media at the University of Brighton, and Guests of Honour include the iconic comic book creator Pat Mills, whose controversial 1970s magazine Action provoked parliamentary discussion and moral panic campaigns. Pat Mills will receive his Cine-Excess Lifetime Achievement award from Martin Barker (Emeritus Professor, Aberystwyth University) in a special onstage event which considers how Action and Pat Mills’ creations fed into wider traumas of youth violence and urban unrest during the 1970s. Alongside Pat Mills, Cine-Excess IX will also be profiling the work of cult Canadian director William Fruet, whose startling creations include the unsettling home invasion thriller Death Weekend (1976) as well as the later Trapped (1982) and Spasms (1983). As well as hosting a rare screening of Fruet’s controversial thriller Death Weekend,  other highlights of Cine-Excess IX include the UK theatrical premiere of Feed the Devil (viewed by many as the new Canadian Cannibal Ferox), which will be accompanied by a special industry panel on the topic of contemporary cult co-productions.

The theme of Cine-Excess IX considers how the cult image can be viewed as an uncomfortable reflection of wider discontents during key periods of historical turmoil. From ‘paranoid’ 1970s chillers exploring the traumas of Vietnam, Watergate and urban unrest, to post 9/11 torture controversies and beyond, American cinema has often referenced a wide range of social, political and military horrors within the ‘disreputable’ arena of the cult film canon. Europe has also used a wide range of cult representations to acknowledge historical traumas that have ranged from fascist fears and militant threats to ecological anxieties and recent immigration phobias. In addition, other global cultures frequently figure their anxieties through a range of marginal movie cycles that also warrant further investigation.

In order to explore these themes, Cine-Excess IX will consider the concept of the cult film as a reflection of historical trauma from a range of differing theoretical and methodological perspectives, while also considering pertinent national case-studies across film, television, literature, comics and digital media. The Call for Papers is now extended to Monday 28th September 2015 in order to commission new panels devoted to the work of Pat Mills and William Fruet,  with a third new panel devoted to commemorating cult cinema of the late Wes Craven.

While proposals are still invited for papers on any aspect of historical trauma, hysterical texts: we would particularly welcome contributions focusing on the following themes:

We welcome individual paper submissions, panels and roundtable proposals related to the above conference themes. Please send a 300-word abstract and a short (one page) C.V. by Monday 28th September 2015 to:

Delegates fees for Cine-Excess IX are £100/£60 (concessions), and includes entrance to the conference and related Cine-Excess screenings and industry panels.

A selection of conference papers from the event will be published in the Cine-Excess E-Journal in 2016.

For further information and regular updates on the event (including updates on guests, screenings and industry panels) please visit www.cine-excess.co.uk