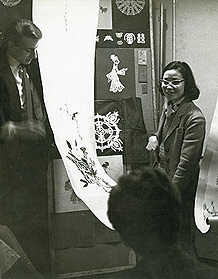 Ronald Horton was an artist, collector and highly successful Head of the Art Teacher Training Department at Brighton College of Art from 1944 to 1966. Having grown up in Brighton, he studied under Ginnett  at the College from 1919 to 1923, as had his elder brother Percy Horton who went on to be the Ruskin Master of Drawing at the University of Oxford. A student contemporary of Charles Knight, he then went up to the Royal College of Art where he studied under William Rothenstein from 1925 to 1929. Highly active artistically, Horton also worked for the architectural sculptor William Aumonier, later assisting Rex Whistler on murals and stage sets between 1930 and 1936. He also exhibited at the New English Artists’ Club and at the Royal Academy from 1932, teaching evening classes at the Working Men’s College, St Pancras, from 1928 to 1932 and at Hackney Technical Institute from then until 1936. During the Second World War he and his wife Margaret were evacuated to Leek, Staffordshire. They then moved to Brighton College of Art where, in 1944, Ronald was appointed as Head of Art Teacher Training and Margaret as a teacher of Italic handwriting (see also Alfred Fairbank).

Brighton’s Art Teacher Training Course under Ronald Horton was one of the most successful in Britain, attracting students from all over the world. They enjoyed a lively and engaging curriculum that drew on the rich and diverse cultural heritage of their peers through class presentations, performances and discussions. A large collection of Horton’s papers and photographs is deposited at East Sussex County Record Office (AMS 6375). Horton was a keen collector of many things that were bound up in the visual education of children including chapbooks and other illustrated books, model theatres, children’s games and puzzles. He was also involved with Anglo-Soviet Friendship and, like John Biggs, made numerous trips to Eastern Europe where he collected a variety of materials used in his teaching.

Ronald had joined the Communist Party in Brighton in 1921, describing in his writings[1] fellow early members such as the ‘Harrison brothers, carpenters and boat builders of Portslade or Shoreham, staunch T[rade].U[nion]ists and fine upstanding young men. I have since had as a student the son of one of them…also a splendid talented man who painted large murals at the Friends Centre in Brighton.’