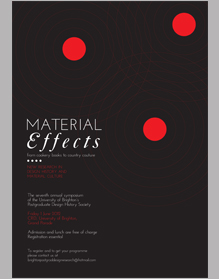 The Brighton postgraduate design history society (PDHS) is delighted to be holding its seventh annual postgraduate symposium on the 1st of June at the Centre for Research and Development (CRD) at the University of Brighton's Grand Parade campus.

As always the programme is extremely varied focusing on many areas within material culture and design history. The symposium acts as a showcase for the high quality postgraduate research conducted in the field and particularly, though not exclusively, as an outlet for the MA in Design History and Material Culture at Brighton. We aim to provide a friendly welcoming atmosphere to our students in the very early stages of their research careers and welcome their fresh takes on diverse subjects while giving them the opportunity to get feedback on their research from respected academics.

Admission and lunch are free and open to all who are interested, whether they be affiliated with the university or not. See below for a list of papers to be presented on the day in order of presentation time. For more information, registration and a full programme please contact us at brightonpostgraddesignresearch@hotmail.com

Bridget Millmore, "Love the Giver & Keep This For his Sake: love tokens produced by convicts transported during the eighteenth century"

Sarah Ward, "A Pretty Little Dish: The Production of a New Form of Cookery Book in Eighteenth Century Britain"

Paul Fawcett, "The Introduction of Papier Mâché Japanware to the European Household"

Triin Jerlei, "What could be bought? Political consumption in Soviet Estonia"

'Material Effects: From Cookery Books to Country Couture', following in the footsteps of its predecessors, was a great success with a fascinating set of subjects and a lively, engaged audience. As usual we were proud to give the MA History of Design and Material Culture students the chance to present their first papers at an academic meeting of this kind and to welcome back some more experienced speakers as well.


Our opening speaker was Bridget Millmore who presented on her PhD topic: 18th Century love tokens produced by convicts during the 18th Century. She argued that by looking at the material culture of the eighteenth century, in particular love tokens, crafted by hand from coinage, interpersonal emotional histories of the "labouring poor" can be revealed. In her presentation she revealed not only that these engraved and punched tokens could carry important messages but that they endure as beautiful pieces of design.

Sarah Ward, who was a student on the MA programme at the time of the symposium, presented her paper on an early cookbook revealing some fascinating insights into the study of eighteenth century writing and book production.The Art of Cookery Made Plain and Easy by Hannah Glasse, published in 1747, showed something of an innovation in the field, presenting as it did, a set of recipes to be undertaken by the ordinary middling classes. The history of this particular cookbook helped to explore a wide range of themes; from book production to women’s social history and to the history of cooking. It also led to a discussion about the usefulness of cookery books as sources and what can they really tell us about the people who wrote and read them.

The final paper in the session was by Paul Fawcett, another MA student presenting work done during the taught portion of the course. His paper talked about papier mache japanware in Britain.

After lunch we had something of a marathon session of four papers on a very diverse range of subjects.

Janet Aspley, a recent graduate from the MA programme presented a very informative and entertaining paper on country music dress, the subject of her dissertation. Focussing on the issue of gender she showed how floral motifs, far from being emasculating, as they are often perceived, were merely part of a heritage of dress decoration from Eastern Europe, Native America and African American culture. Her presentation convincingly showed the connections between the dress traditions of these disparate cultures while also introducing the audience to their use in the "country couture" of the twentieth century.

Katharine Crompton, presented on her MA dissertation topic: the dress habits of English missionaries to China in the 19th Century. Her paper showed how Christian missionaries in this period used dress to integrate with the local culture. Disagreement over the degree to which this "enculturation" was practiced in the missionary community, she argued, shows how such missions were not merely monolithic imperialist expeditions.

Triin Jerlei, a PhD student at Brighton presented on her topic: consumption in soviet-era Estonia. In contrast to consumption in the West, often presented as part of a narrative of excess and desire, Estonian consumption had to be based on what could be bought. Triin presented fascinating evidence of bricolage and the imitation of western design which sprang from this culture of scarcity.

Finally for this session, Lina Kang, also a PhD student at Brighton, presented a paper on the spread of branding from product to people in large corporations. She provided evidence from case studies of American Apparel and Pret a Manger to show how uniform policies can be used to incorporate staff into the brand of the company by making them into a physical embodiment of its message and style.

Since Ms Dover was unfortunately unable to attend the last session of the day was composed of only two papers focusing on material culture and art practice.

Gavin Fry, studying for his PhD at Brighton, presented on "Tortoise" a piece he produced for an art exhibition held at Nymans, a National Trust property previously owned by the Messel family. The work is an experimental piece featuring bold and flamboyant embrodery work. Gavin drew on the work of Oliver Messel, the noted stage designer, to produce a piece which he felt mirrored Messel's innovative use of materials such as foil, beading and shredded cellophane. In his paper he explored how such a piece, while intimately tied to the character of one of the former residents of the house fits into the conventional domestic surroundings in which it was placed for the exhibition.

The final paper of the day was Matt Smith's. Matt presented on work he has produced for the Other Stories exhibition held at the University of Leeds. Drawing on the papers of Edward Carpenter, a Victorian writer and gay activist, and LGBT oral histories from the Brighton OurStory archives Matt compiled a set of quotes which he then combined with everyday found objects to create new art pieces. These pieces were then exhibited in the gallery space alongside the main collection as an "intervention". In his work Matt showed how the repurposing of material culture and its placement in a gallery context can provide a striking emotional connection with a certain history as well as leading us to question how museums represent history.

The end of the day featured a lively discussion and recap of the days proceedings with interesting comments contributed by many members of the audience.

The PDHS would like to thank the School of Humanities for their contribution of funding as well as the administration staff who facilitated the running of the day and provision of a venue. Our thanks also go out to all of the delegates who provided a welcoming and engaged atmosphere and, of course to the speakers, many of whom had spoken for the first time on the day. Chairs for the day, also due some gratitude, included Triin Jerlei, Marie McLoughlin and Gavin Fry.