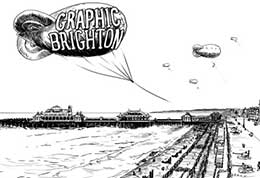 University of Brighton College of Arts and Humanities present the third annual Graphic Brighton symposium with its 2016 theme of Conflict and Resolution, to connect with the Great War Centenary.

The symposium is aimed at scholars, creators, publishers and readers of sequential narratives, and follows successful conferences in 2014 and 2015, which featured such guests as Hannah Berry, John Higgins, Karrie Fransman, David Lloyd, Pat Mills, Chris Riddell and Emma Vieceli, discussing their work. This year’s conference dates are 9th and 10th December 2016.

For Graphic Brighton 2016, in addition to a practitioner based day, we are introducing an academic strand and papers have been submitted on the following topics:

More Information, including the full schedule for the day.

There is also a discount for people who have booked tickets to the University's pop-up makers Fair - more info about that event at: http://arts.brighton.ac.uk/whats-on/gallery/gallery-exhibitions-2016/dec2016/pop-up-makers-fair.

Barbara Chamberlin is a Senior Lecturer at the University of Brighton and has an eclectic teaching and research profile that combines language teacher education, sociolinguistics and increasingly comics studies at both under and postgraduate levels. She has just started a part-time PhD at the University of Sussex exploring the construction of female monstrosity in comics.

Alex Fitch presents the UK’s only monthly broadcast radio show about comics – Panel Borders – on the Arts Council Radio Station, Resonance 104.4 FM / DAB in London. He has been published on the topics of comics and film by University of Chicago Press and University Press of Mississippi, and is an assistant editor of Electric Sheep Magazine online. Information about previous Graphic Brighton events.

Graphic Brighton is run in association with University of Brighton College of Arts and Humanities with assistance from QueenSpark Books and Myriad Editions. Recordings of selected public talks will be broadcast on ‘Panel Borders’, Resonance 104.4 FM / DAB (Arts Council)